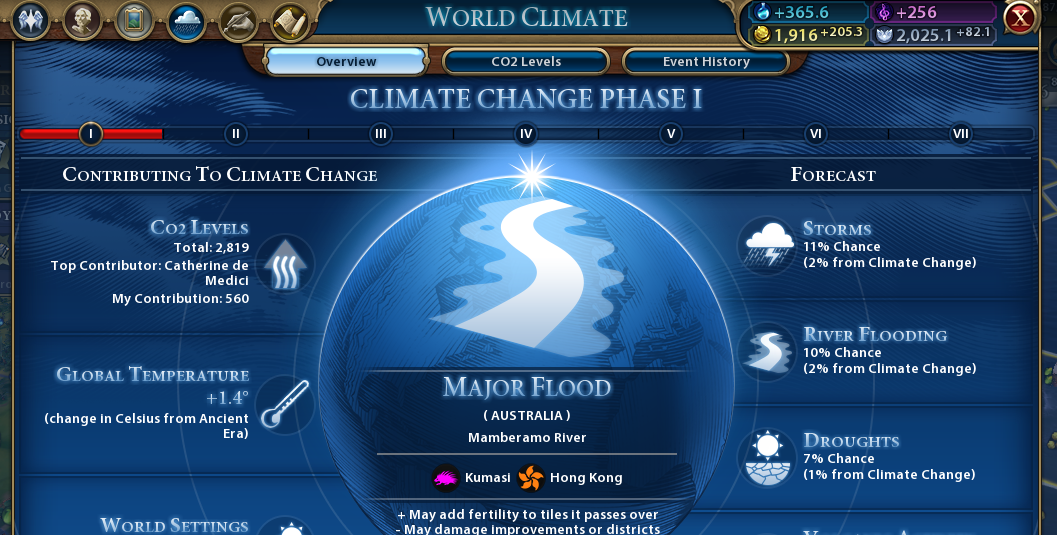 God simulator fans have been busy for the past three months, thanks to the release of the second expansion to Sid Meier’s Civilization VI. Titled Gathering Storm, the expansion offers a number of new mechanics relating to climate. Unfortunately for us is the fact that, insofar as the Civilization games are history simulators, this one suggests that humanity is all but guaranteed to destroy the planet.

The fact that humanity is all but guaranteed to destroy the planet becomes clear if one considers the game theory logic of Gathering Storm.

A game of Civilization normally starts in 4000 B.C. At this point your empire will consist of one small village, a rudimentary knowledge of agriculture, and a gigantic, unknown map full of rivals to be explored. From here, you will be presented with a near-infinitude of different decisions. If you make the correct ones, your civilisation will survive against the military and economic threats posed by the others.

As the scientific knowledge of your civilisation progresses, it will advance through the Classical Era to the Medieval Era, and then to the Renaissance Era. Through each era, your empire’s military power increases, but nothing you do affects the global environment until you discover industrialisation. Once you get to the Industrial Era, your scientists are beginning to grapple with the uses of coal.

In Gathering Storm, it’s possible to harness the power of coal to not only create a more powerful range of naval vessels, but also to fuel power plants that greatly increase the productivity of the empire’s workshops, factories and arsenals. This also has the effect of spewing pollution into the atmosphere, measured in-game by CO2 levels.

In the Civilization series, technological advancement tends to proceed at roughly the same speed for everyone. This means that any technological and military advantages are usually slim and sometimes short-lived. So it’s very possible that, when the player discovers industrialisation, they are in a war that they are losing or which has stalemated. The increased power that comes from harnessing coal, then, is often enough to break the deadlock.

So the imperatives to burn coal and oil at the expense of the global environment are inescapable. If you don’t do it, your enemy will, and then they will destroy you. He who rapes the planet the fastest gets the edge on his enemies – and stays alive. As above so below: the kill-or-be-killed logic of the animal world applies at all levels of human organisation.

This is not just a matter of game-world logic either.

By 1903, British Admiral John Fisher had realised the strategic imperative to switch the British Navy from coal to oil. A navy that was fueled by oil was many times more efficient than one fueled by coal. Its ships, compared to coal-powered ships, had greater range, greater speed, lighter weight, required a smaller crew – and could carry more guns.

Fisher encountered some difficulty in persuading his higher-ups to agree to the change. Eventually, however, the iron logic prevailed, and the Royal Navy switched to oil just in time for World War One. The British strategic victory at the Battle of Jutland underlined the degree to which the switch to oil had created a distinct naval advantage. A failure to have done so would have meant defeat.

At this point, the extreme difficulty of taking measures to preserve the Earth’s environment by way of not burning too many fossil fuels becomes apparent. If the Royal Navy had remained on coal, it’s possible that the Germans would have switched to oil and then won a military advantage. This could have led to the destruction of Britain itself, for that is the nature of military advantages.

Why would one side sit back and allow their enemies to obtain a strategic advantage over them? They wouldn’t. In the same way that no Civilization player will refuse to build battleships and power plants and allow the other players to destroy him, no real-life leader would refuse a military advantage that kept their people safe.

What emerges, from a game theory perspective, is a global tragedy of the commons-style scenario. The payoff to the people burning the fossil fuel is that they keep all the benefits of harnessing the energy. The drawback is the environmental damage done by burning the fossil fuels, which are mostly spread out across the entire world.

We do have one great factor in our favour. On our planet, technological advancement occurred in an extremely unequal manner, unlike in a game of Civilization. The Industrial Revolution began in Britain, and by the time the rest of the world had caught up, the British had built a global empire.

This made it possible for a minority of nations to develop so far economically that they were able to produce scientists who could foresee the danger of burning too many fossil fuels, and before we had burned so many that the planet was on an unavoidable path to disaster. And here we are today, but at a crossroads.

It’s not clear what the path away from this situation is. However, as this newspaper has mentioned before, the average person will eventually have to cut their consumption to a level roughly equal to that of a New Zealand beneficiary. This is not optional, as the planet simply cannot support more than this. The only thing certain is that a turn away from materialist consumption is necessary. 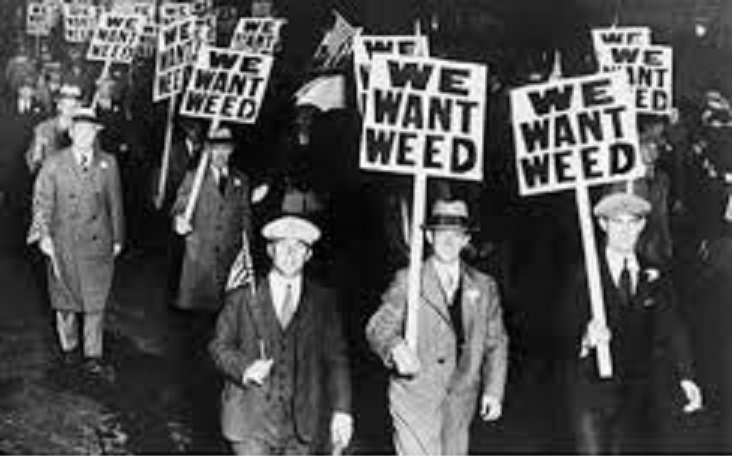 One of the strongest arguments for cannabis prohibition was that it was what the majority wanted. For better or for worse, we live in a democratic system, which means that the law ought to reflect the collective wisdom of the majority, and opinion polling in Western countries used to favour cannabis prohibition. As this article will examine, that is no longer the case.

If one goes back 100 years, most people thought that cannabis should be legal anyway, as its medicinal applications were obvious: cannabis prohibition is the experimental condition, and it has failed. So this sharp decrease in prohibitionist sentiment over recent years is really a return to the baseline condition of liberal cannabis sentiment.

The public did consent to the experiment with prohibition, this is true, but this was the result of a naive people believing the lies of politicians beholden to industries that saw cannabis as a competitor. Foremost among these were the timber, alcohol and pharmaceutical industries. Being the paid whores that they are, Western politicians happily told lies about how cannabis had no medicinal value and was a dangerous drug, because their sponsors profitted from it.

As a result of these decades of lies, the public has not been accurately informed. As a result of that, they could not make correct decisions. Because politicians have been lying to people for decades about cannabis, there has been a common perception about cannabis that has taken a lot of effort to correct. When the public are accurately informed, things are different.

If people are correctly informed about cannabis, with reference to science, evidence and reality, they almost always come down on the side of legalisation. There is simply no scientific evidence supporting any of the common arguments about cannabis causing violent murders, rapes and general madness. The mid-1990s repeal movement in California associated with Proposition 215 was possibly the first time that a proper public attempt to tell the truth about cannabis had ever been made, and in that instance they came down on the side of legalisation.

As mentioned above, a clear majority of Americans are now in favour of legal cannabis, and something similar can be observed in New Zealand. Although opinion polling about the upcoming cannabis referendum is rudimentary on account of that the actual referendum question is yet to be formulated, what little there is suggests that the pro-cannabis side is already ahead. Probably it will pull further ahead as more positive news comes in from American states that have legalised.

Other opinion polls, asking more specific questions, have returned similar results in New Zealand. A Drug Foundations survey conducted in July found that two-thirds of the country wanted some kind of change to the cannabis laws, although they were not given a clear distinction between legalisation and decriminalisation. It also found that the prohibitionist side was no longer winning the recreational cannabis debate.

The next generation of young people is heavily pro cannabis all over the West, as seen in Understanding New Zealand. McGlashan calculated that the correlation between being under 20 and voting for the Aotearoa Legalise Cannabis Party was 0.41, whereas the correlation between being aged 65+ and voting for that party was -0.43. This means that the opponents to cannabis law reform are all dying off: after all, society advances one funeral at a time.

What this suggests is that the victory of cannabis law reform is inevitable. The fact is that the majority of anti-cannabis sentiment is held by brainwashed old people who are dying off. There is already a majority in favour of cannabis law reform everywhere, and this will only grow stronger as time progresses and old people who have been conditioned to hate cannabis users die.

Cannabis ought to be legal because a majority of people have now realised that the fears were grossly overblown and they want reform. Cannabis prohibition no longer has the support of the people, and support for it continues to fall. In a short number of years there will only be a remnant of cannabis prohibitionists left, and it might be better to put them out of their misery now.

The purpose of this program is to calculate the fair return on a soccer or Test cricket match, given that you know what the odds of both teams winning are (or at least what’s being offered on those sides).

You would use this program if you were a BetFair user and wanted to find an opportunity for arbitrage on a soccer or Test cricket match.

The program starts with all values at 3 00. This represents $3.00 in the decimal system of odds measurement. To change the odds for either Team One or Team Two, click on the green or red buttons next to the starting values. The green buttons increase the value and the red ones decrease it. The number (-1 or -10) represents by how many cents the value will change when you press that button.

When you change the values for either Team One or Team Two, the fair odds of a Draw will change. They are calculated on the fly so that the odds for Team One, Team Two and the Draw all add up to 100% exactly. In other words, as the odds for either team go up, the odds for the draw will go down, and vice-versa.

The most obvious use for this program is to calculate the arbitrage points for betting on the draw.

Using the above as an example (screenshot taken at Lunch on the first day of the Black Caps vs. South Africa Test in Durban, 2016), you can enter 2.16 for Team One and 5.9 for Team Two.

The most basic way to use this program is to calculate if the draw if overvalued or undervalued, and, if either, to lay or back it respectively.