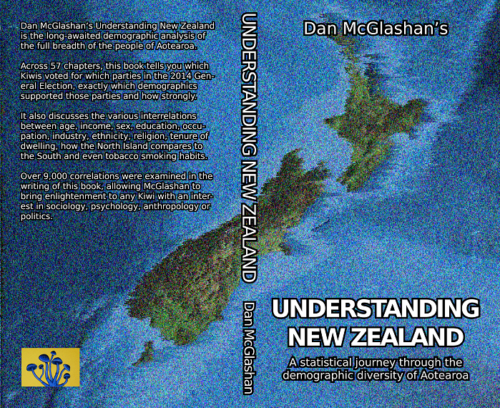 The paperback version of the New Zealand Edition of Understanding New Zealand is available from the VJM Publishing TradeMe store for $29.90

The paperback version of the International Edition of Understanding New Zealand is available from Amazon for USD19.99.

The Kindle version of the International Edition of Understanding New Zealand is available from Amazon for AUD11.99.

Dan McGlashan’s Understanding New Zealand has now (07 DEC 17) been released as a paperback 2nd Edition to take into account the results of the 2017 General Election.

This brilliant and unprecedented demographic analysis of the full breadth of the people of Aotearoa has been updated to tell you what groups of people voted for which parties in the 2017 General Election, exactly which demographics supported those parties and how strongly.

It will also tell you about the direction and size of trends in voting patterns from 2014.

Compiling the data from the Electorate Profiles index on the New Zealand Parliament website into a correlation matrix, Understanding New Zealand discusses the various interrelations between age, income, sex, education, occupation, industry, ethnicity, religion, tenure of dwelling, how the North Island compares to the South and even tobacco smoking habits.

Over 11,000 correlations were examined in the writing of this book, allowing McGlashan to bring enlightenment to any Kiwi with an interest in sociology, psychology, anthropology or politics.

One thought on “Understanding New Zealand”