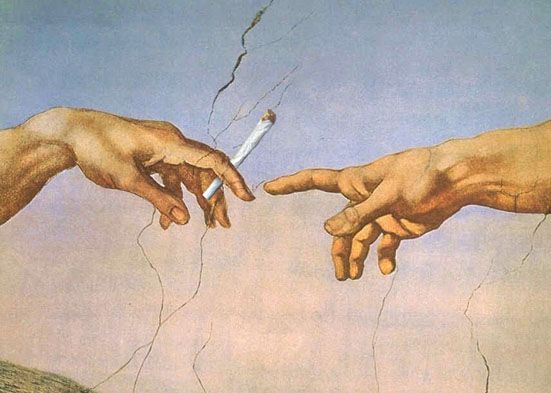 Genesis 1:29 states: “And God said, Behold, I have given you every herb bearing seed, which is upon the face of all the earth…”

It’s obvious from reading this, on one of the first pages of the Bible, that according to Christian belief, God created cannabis specifically for the benefit of humans. Cannabis is a herb that bears seed, and we encountered it on the face of the Earth, so therefore a Christian ought to believe that its presence here on Earth is a gift from God that ought to be cherished.

Indeed, it’s obvious why a benevolent God would have created such a thing. For someone with the kind of illness that cannabis treats, it can feel like a godsend. Many people with psychological problems have found that cannabis can make the difference between a restful night’s sleep and eight hours of torture. For such people, providing cannabis is bound to engender feelings of gratitude.

Is it not true, then, that a human Government working to prohibit this medicine, and to make it harder for people to get hold of, is causing people to suffer needlessly, and therefore is doing evil work?

Christians are fond of saying that the world is ruled by Satan, and that the Governments of the world all serve Satan. This will to serve evil is the main reason, they contend, that evil exists. Satan desires to thwart the will of God and to destroy the creation of God, and to cause God’s most blessed creation to suffer on account of his infernal envy.

Fair enough, but then why support evil by opposing cannabis law reform? If Satan tricked the rulers of the world into prohibiting a medicine that God had created, why not vote to change it back?

If one opposes legal cannabis, is that not tantamount to saying that God made a mistake by creating cannabis for human use, and that humans know better than God by making it illegal instead? From an Abrahamic perspective, this surely constitutes a grave sin. It’s blasphemy to elevate the laws of men above the laws of God.

A reader might object here, and say that this argument is just an example of the naturalistic fallacy. This objection argues that, even if one concedes that God created cannabis, this doesn’t mean that we should be using it. After all, we don’t eat nightshade berries either, and those are just as much a part of the natural world as cannabis is.

A logical person would agree. Just because cannabis is natural doesn’t mean that everyone should necessarily be using it. However – no-one is arguing for this. No-one is arguing that anyone should be forced to use cannabis, or even exposed to it in cases where this exposure would cause suffering. To the contrary, cannabis law reformers would argue that legalisation is better for keeping it out of the hands of the wrong people.

All that cannabis law reformers want is for the Government to stand back and allow them to use a natural plant, something that appears to be just as much a part of creation as the sunlight and the rain, as well as the wheat, apples, kiwifruit, potatoes and all the other plants.

Cannabis ought to be legal because it’s a moral obscenity for humans to arrogate to themselves the power to make parts of Nature, elements of God’s creation, illegal. There is a scriptural basis for believing that God put cannabis here for the benefit of humans, and anyone who believes in those scriptures surely must also believe that God did not do so in error.