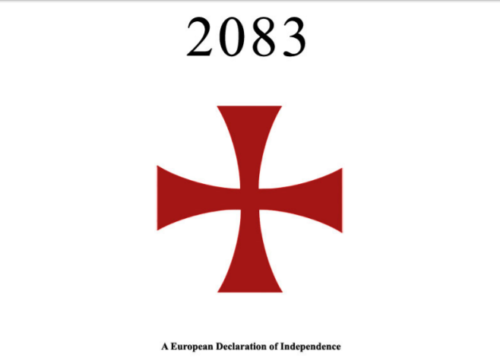 Few are aware that the manifesto of Norwegian mass murderer Anders Breivik has already had a considerable impact on the narratives within Western popular culture, but over the next few months we will have a close look at how. Today we introduce the VJMP Reads column, in which we try to get to grips with lesser-known or suppressed works of philosophy, especially those of a political bent.

Titled 2083: A Declaration of European Independence and published in 2011, the manifesto is not a light read. The version we are using weighs in at 1,515 pages – a similar length to War and Peace or The Stand.

Neither does it have any ambitions to be a light read. The vast scope of the document can be appreciated from a cursory glance at the table of contents, which runs to over 300 items.

The introduction starts off with a very powerful, and very unsettling, argument: that all ideologies are necessarily false. All ideologies, according to Breivik, declare a model of reality to be reality itself, and, when inevitably proven false, attempt to suppress that reality to the extent that they have the power to do so.

Their ultimate goal is to suppress the very thinking of thoughts that, although they may reflect reality, do not further the ideology.

Breivik is very direct about approaching these questions from a conservative perspective. Like many other conservatives, he harkens back to an idyllic Golden Age in the past – in Breivik’s 1950s,

“Our homes were safe, to the point where many people did not bother to lock their doors. Public schools were generally excellent, and their problems were things like talking in class and running in the halls. Most men treated women like ladies, and most ladies devoted their time and effort to making good homes…”

Western Europe, he laments, has been conquered by ideology. The dominant ideology – variously referred to as ‘Marxism’, ‘political correctness’, ‘cultural Marxism’ and ‘feminism’ among others – is one that seeks a classless society where the outcome for every person is the same.

Because people are different, they will end up with different outcomes as a consequence of natural laws. Therefore, in order for equal outcomes to be reality, people have to be forced into this reality against their will and against nature.

Variants of this basic argument are made by most conservative commentators, and to that end Breivik is not unusual.

Much of the introduction to the manifesto is taken up with a history of the ideology of political correctness and Marxism, which Breivik treats as having waged a many-decades long war against the order of the West.

What Breivik is decrying, fundamentally, is chaos; what he fundamentally desires is order. The current order is correct, and therefore efforts to destabilise it are wrong. Although the situation is grim – there is a distinctly paranoid tinge to the introduction – Western Europe can still be saved through a sufficient effort of will.

One curiosity is that Breivik, who is approaching the issue from a conservative perspective, uses many arguments that echo George Orwell, who was a leftist libertarian. “Whatever controls language also controls thought” is a paraphrasing of a famous line from 1984.

This explains why many of his arguments have broad appeal. His criticisms about how the emphasis of higher education has changed over time, from providing an education in the liberal arts to providing a cultural uniform that one learns to wear to display one’s political virtue, ring home with any freethinker that has been through university.

Breivik also identifies with Christianity, decrying a university course “designed to denigrate the Bible as cleverly crafted fiction instead of God’s truth.” The patriarchal nature of this Abrahamic cult is considered by Breivik to be a positive thing.

And it’s these qualities, Breivik contends, that have weakened European culture and society to a point where Islamic conquest becomes possible.

What’s clear from the introduction to this document is that, if there’s a team yin and a team yang, Breivik is fully committed to team yang. For him it is order, not free expression, that is the foundation of all that’s good and moral in the world, and threats to that order cannot be improvements but are necessarily evil.

The VJMP Reads column will continue with Part II of Anders Breivik’s manifesto.

One thought on “VJMP Reads: Anders Breivik’s Manifesto I”