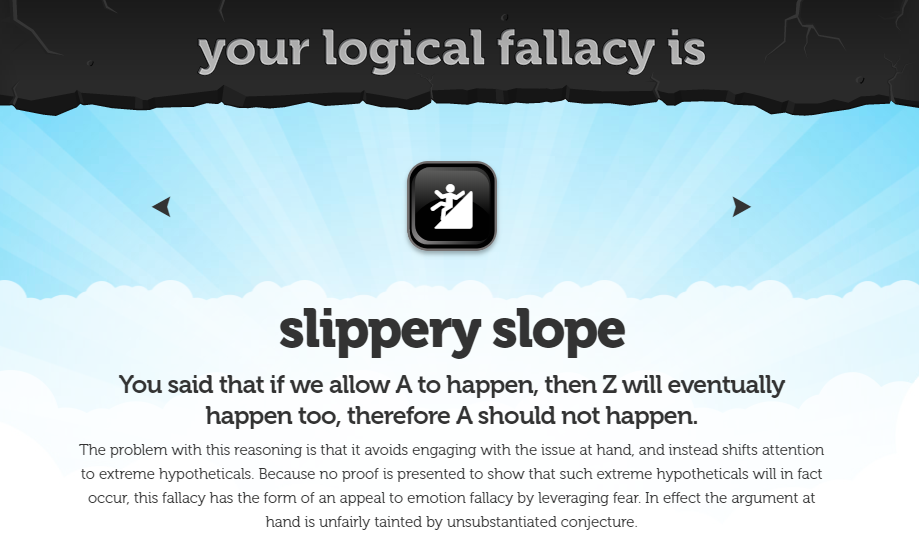 The slippery slope argument is used so often that it has become a formal logical fallacy. In short, this logical fallacy is when a person argues that a certain action must not be allowed, because if it is allowed, it will lead to worse actions also becoming allowed. To prevent those worse actions from coming to pass, we should keep the status quo, because to make even a small change is to step onto a slippery slope that will inevitably lead to disaster.

None of these feared outcomes occurred, which is why the slippery slope fallacy is a recognised fallacy.

The slippery slope argument, then, is wheeled out almost every time someone tries to change any law. So it’s not a surprise that it also gets wheeled out in response to proposals for cannabis law reform. The problem is that we’ve had cannabis prohibition for so long now that almost no-one can remember life from before it was brought in, so we’ve forgotten that prohibition has done more damage than legal cannabis ever could.

The old form of this argument was that cannabis use is a slippery slope to heroin use, and therefore we have to keep cannabis illegal to protect people from getting sucked into heroin, because they’re all some form of “dope”. Nowadays, almost everyone knows that the sort of people who use cannabis have very little in common with those who use heroin, and don’t generally move in the same circles.

Cannabis prohibitionists warn us breathlessly that liberalising the cannabis laws will lead to “THC-laced confectionery” being sold to schoolchildren. The New Zealand media has shown images of gummy bears that are purported to contain 30% or more THC, and the implication is that a small child might gulp down a couple of dozen of them thinking they’re sweets. Ignoring the fact that eating two dozen cannabis-infused gummy bears would still be safer than eating two dozen paracetamol, the argument fails for at least two major reasons.

For one thing, most of the arguments about harm don’t apply to other drugs. It’s fair and reasonable to argue that cannabis causes less harm than alcohol; it’s neither fair nor reasonable to make the same argument of crystal methamphetamine. Neither has anyone ever argued that heroin or methamphetamine was a spiritual sacrament.

Where those arguments do apply, then it’s fair enough to consider them on their own merits. The War on Cannabis is, indeed, one front in the wider War on Drugs, and just because the case for drug law reform is the most obvious in the case of cannabis doesn’t mean it doesn’t exist in the case of other drugs. It happens to also be true that the law against psychedelics is as ridiculous as the cannabis one, if not more so.

The other major reason is that we are entirely free to recriminalise cannabis, should we reform the current laws and then decide the change isn’t working. The people who have looked at the evidence and the previous experience of places that have relaxed their cannabis laws almost all believe that this won’t happen, but it might. If we do decide that cannabis law reform doesn’t work, we will be free to change it back.

The argument that legalising cannabis would be a slippery slope to various kinds of social decay is not valid. Cannabis prohibition is, and never was, a wise move – prohibition is itself the experimental condition. In any case, relaxing the law is not a move into permissiveness but finally having the courage to correct an error that was made generations ago.