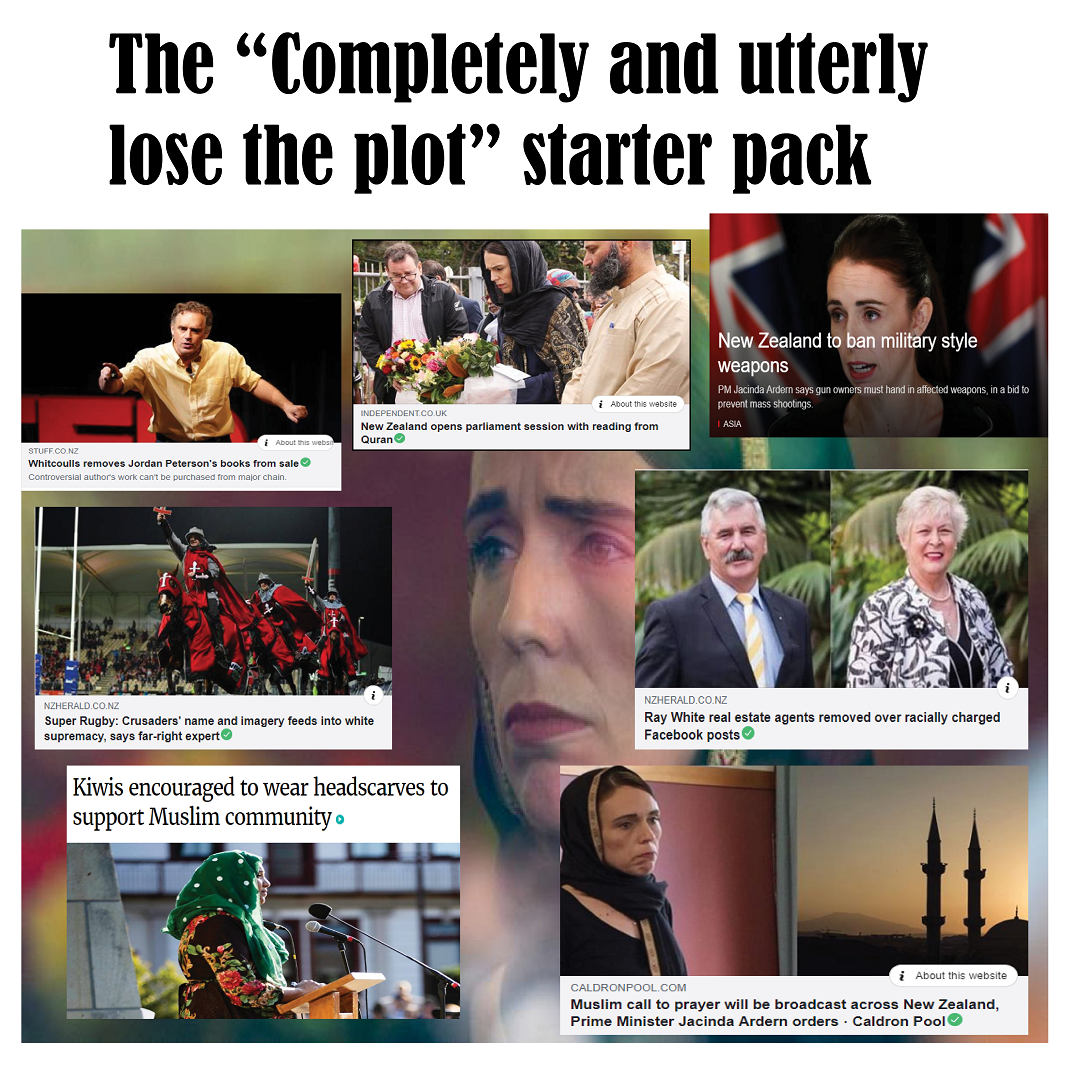 New Zealanders have been used to thinking of ourselves as a passionless, even dour people, very calm, very sober and not prone to great emotional displays. Not for us singing at sports fixtures, crying in public or over-reacting to political events. This self-appraisal has been shattered by the events of the past fortnight. The last half of March 2019 will go down in history as the Great New Zealand Chimpout.

The first to chimp out was Branton Tarrant, shortly after lunchtime on March 15th. Driven insane by the ongoing collapse of Western Civilisation and the complicity of politicians, he chimped out with a semi-automatic rifle at the Al-Noor Mosque in Christchurch, to the tune of 51 dead. When the gunshots stopped, people were relieved, but little did New Zealand realise that the chimping out was just beginning.

For a sleepy nation at the bottom corner of the world, the New Zealand reaction was much like being awakened by having a bucket of cold water dumped over one’s head, as most Kiwis had truly believed that such a thing would never happen here. At first, there was the natural shock and horror that accompanies a mass murder, but these perfectly understandable feelings soon gave way to much uglier, cruder and more primitive sentiments. Many of the people holding these sentiments saw an opportunity in the tragedy.

Upon hearing that the shooter was white, leftists rejoiced. In the emotion of the moment, they felt they had a green light to abuse anyone who had ever uttered any misgivings about immigration for any reason. Maori radicals promptly joined in, using the occasion to demonise white people in general, and implicate all of them in collective guilt. Those who mentioned that Tarrant’s anti-immigrant invective was really very similar to the Maori radical anti-immigrant invective found the reaction like kicking a wasps’ nest.

Then the New Zealand Government decreed that our firearms laws were going to get changed. This they did without any consultation with the community – it was simply forced through, as if the emotion of the moment was enough to demand it. Few had the sense to speak out, as the prevailing uncertainly and fear caused most people to fall obediently behind the Government. It was then that the Great New Zealand Chimpout could be said to be hitting its peak.

Jacinda Ardern set the national tone, which was to be one of grovelling submission. She was pictured wearing a hijab, probably a signal to the massive Indonesian and Arab export markets to please not take this attack as an indication of wider anti-Muslim sentiment on the part of New Zealanders. What the nation needed was a signal to the New Zealand people to hold fast, to keep their shit together, but in the hysteria of the moment no-one was able to put order to the nation’s emotions.

In line with this grovelling, Massey academic Paul Spoonley was given a platform to spout off about how the name of the Crusaders rugby team was an example of white supremacy. At the peak of the chimpout, everything was decried as an example of white supremacy, and people were discussing the need to ban “online cesspools” such as 4chan. Most ISPs went as far as blocking a number of sites relating to Internet counterculture, including 4chan, 8chan and Encyclopedia Dramatica.

The chimping out wasn’t limited to just Government, academia and their followers. The corporate world decided to lose their minds as well, perhaps characterised best by Whitcoulls. Based on little other than pure panic and a vague sense of association between psychological science and far-right wing extremist terrorism, Whitcoulls made the decision to remove Jordan Peterson’s book 12 Rules For Life from their sales shelves (a decision since rescinded).

Perhaps the crescendo of the chimpout was the decision of the New Zealand Chief Censor Davis Shanks to ban Tarrant’s manifesto, which meant that anyone possessing a copy would be liable for a ridiculously draconian 10 years imprisonment. Like authoritarians and control freaks everywhere, Shanks has apparently never heard of the Streisand Effect: his action caused half of New Zealand to go on FaceBook to reference “the manifesto”, which got the other half curious in it.

Throughout this chimpout, the New Zealand media has played the role of the feces-thrower.

In a complete 180 from the usual narrative when Muslims are the perpetrators of terror attacks, they have cashed in as hard as possible, by running countless pieces demonising white people and attributing to them collective guilt for this attack, for colonialism and for all suffering in the world. There is good money in this – the Alexa ranking for one of the chief feces-throwers, The Spinoff, climbed from the low 60,000s to the high 50,000s in just a few weeks, suggesting a growth in brand value of some 50%.

Even today, almost two weeks after the shooting, rags like The Spinoff were openly discussing the need to eliminate free speech for the sake of protecting minorities, a sign that the country is still thinking with panicked emotions and not reason and logic. As any mainstream media boss could tell you, there’s money in hysteria and division: stoke it up and count the cash as it rolls in.

There’s no way to tell when the Great New Zealand Chimpout will end. Already today it’s possible to observe it running out of momentum, but there is still a trial to be had. There is every chance that Tarrant’s trial will be accompanied by some ridiculous anti-freedom measure, which will be intended to suppress dissent but which will be sold to the public as necessary to fight extremism.

At some point, there may be pushback from the ordinary New Zealander, once they regather their senses. Whether or not this happens, we ought to hope that it does, because the Government and the media both benefit from keeping New Zealanders as confused and afraid as possible, and they both have incentive to keep the chimpout going. Eventually, however, it will either run out of steam or be deliberately ended by civilised people.