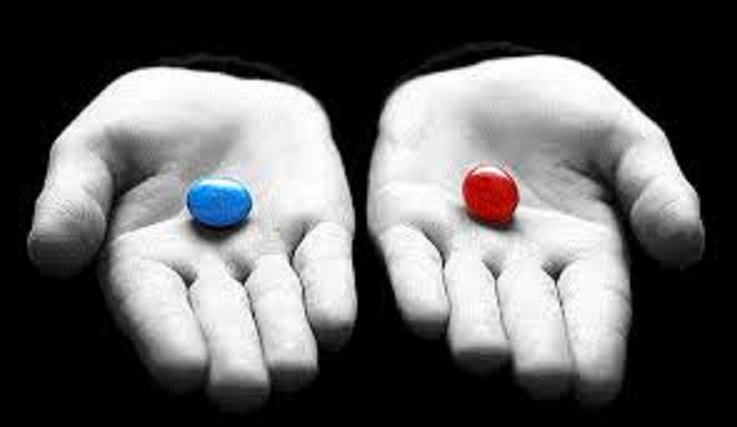 There are many theories that describe the change in personality traits over generations. The most well-known is the Strauss-Howe conception of generations that gave us terms like “Baby Boomer”. Local anarchist philosopher Rick Giles has expanded on this conception, giving us a spiral idea of history based around the ebb and flow of moral cycles. This essay attempts to map both these theories onto the “pill theory” of modern Internet culture.

The Red Pill-Blue Pill dichotomy is a metaphor seen everywhere on the Internet of today. It is based on the famous scene from The Matrix, the film that made a powerful impression on Generation X and, consequently, Internet culture. In this scene, the character Morpheus offers the protagonist Neo a choice of one of two pills: a blue one that will send him back to the dream world of being a normal person, and a red one that will awaken him to the truth of reality and show him “how deep this rabbithole goes”.

It’s a metaphor that hearkens back to Plato’s Cave and the mystery schools before that. The idea is that anyone who has taken the red pill is someone who has voluntarily accepted the truth of reality, no matter how terrible, and who has escaped delusion. They are therefore enlightened, so much so that their lives are now fundamentally different to the bluepilled. Thus, ‘bluepilled’ is effectively a synonym for ‘unenlightened’, ‘gullible’ or ‘a sucker/pleb’.

A related conception is the dichotomy of the White and Black Pills. These serve as rough spiritual metaphors. The idea is that anyone who has taken the white pill is optimistic, full of life, happy and positive. The blackpilled, by contrast, are pessimistic, morbid, depressed and emo. One way of characterising this axis is using the Bloomer and Doomer images, the former blossoming like a spring flower, the latter seeing death and decay around every corner.

As this essay will now demonstrate, it’s possible to map the Blue Pill-Red Pill-White Pill-Black Pill quadrichotomy from popular Internet culture onto both Strauss-Howe’s and Giles’s conceptions of human generational change.

The generation that fought in World War II are the red pilled. They got redpilled harder than anyone since could really understand. It’s impossible to have any illusions when you are facing an artillery barrage or a Panzer charge – you appraise reality accurately and act accordingly or you die, simple as that.

As the war was winding up, they naturally got together, first in their companies and then in their Returned Services Associations, and asked themselves what the fuck the whole war was really about, and who was ultimately to blame. Eventually, they came to understand that the whole idea of a heroic narrative was a complete sham, designed to manufacture consent for a war that really only benefitted arms manufacturers, bankers and politicians. To understand that the world works like this is to be redpilled.

Commensurate with being red pilled is a somewhat traumatised disposition. As a highly social, highly traumatised generation, they hit the booze, and hard. Theirs is an Honour Culture in Giles’s conception, because they risked everything for what they have, and only very rarely complain or show pain or weakness.

The Silent Generation are the white pilled. They grew up during the Great Depression, and so became accustomed to having very little. This has meant that they instinctively feel gratitude for the plenty that we currently do have. They also grew up hearing about how the previous generation saved the world from terrible evil, so they grew up believing that they lived in a society where their forebears only wanted the best for them and where authorities could be trusted.

They are white pilled because they are naturally the most optimistic. This generation grew up with the suspicion that God may well have favoured the Anglo-American style of governance over its German, Soviet and Japanese alternatives. For them, everything works out in the end, and success is simply a matter of continuing long enough.

Their characteristic drug is tobacco, which is appropriate because they are a social generation, and also for the reason that you have to be whitepilled to smoke tobacco because you have to ignore the likelihood that it will kill you. Theirs is more of a Dignity Culture because they haven’t had the need to fight quite as hard as the World War II Generation. They’re not inclined to butt heads over honour; they would rather let things slide.

The Baby Boomer generation is bluepilled. They are Cypher from the Matrix. They don’t care at all about thinking or struggling to overcome, they just want an easy ride and someone to wipe their arse when they get old. For them, staying informed is a simple matter of switching the television on and being told what the truth is. They have a vague sense that reality is truly terrible, so it’s best to not look too deeply into things.

Their problem is that they are essentially doubly gullible. Not only are they not aware of how reality works, having been raised by televisions in an age of wealth, but their parents weren’t redpilled either, having lived in an age of plenty. The Boomers don’t really get it at all, which is why their characteristic drug is opiates. Preferably administered rectally by cheap immigrant labour.

The bluepilled don’t want to think, they just want their entitlements. This is why they correspond to a Victimhood Culture in Giles’s conception. Every obligation they are made to feel is considered an unreasonable imposition, and they deeply resent the implication that they’ve fucked up the world. Their greatest fear is someone cutting their pensions.

The offspring of the Boomers, Generation X, are the black pilled. This is the natural result of having bluepilled parents. Because their parents wanted nothing but the easiest ride possible, they didn’t end up passing on as much knowledge as they could have. Indeed, Generation X were pretty much left to it, many becoming “latchkey kids” who had both parents working. They felt that their parents not giving a shit, and that led to them not giving one either.

Among Generation X, the highest moral value is not giving a shit. This manifests in an exaggerated sense of coolness. To give a shit about anything is to be uncool, which is to be shunned. This is why grunge was so popular among this generation’s teenage years, and why they have been so apathetic towards politics and religion. Apathy means that you can be trusted; ambition means that you might abandon them like their parents did.

Generation X is a natural slave cohort, which is the result of their apathy towards politics. Because they have shunned those who tried to understand the political world and to organise, they are almost completely bereft of both guidance and power. Their characteristic drug is cannabis, because once you realise that there truly is no hope and that no-one gives a shit, you might as well just spark one up and enjoy your day.

It’s not clear how the Millennials will end up defining themselves, because at the moment they seem to be an extended form of Generation X, replete with nihilism and apathy. At some point, one would expect there to be a revolution so that some kind of Honour Culture reasserted itself, but whether this will come at the hands of the Millennials or of a generation that comes later remains to be seen.

What can be predicted is that the nihilistic apathy of the younger generations today will lead to a cataclysm of some kind. It might be military in nature, it might be climate-related, or it might be simple revenge on the Boomers. Whatever happens, the generation that follows the bloodshed will be redpilled, and the cycle will begin anew.