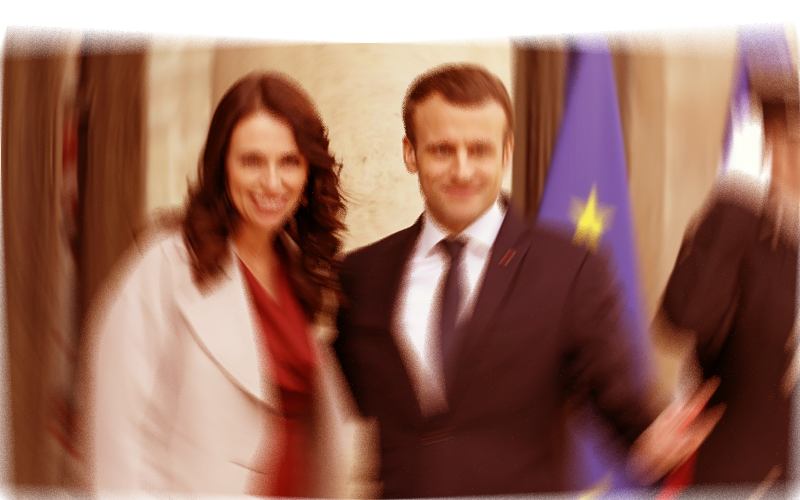 Establishment media sources reported this week that Jacinda Ardern had been speaking at length to French President Emmanuel Macron about anti-terrorist measures during Ardern’s most recent European junket. Considering that the only example of state-sponsored terrorism ever carried out in New Zealand was carried out at the behest of the French, this alliance seems unexpected, to say the least. This article explains.

In France, Macron has faced half a year of intense protests which have often led to rioting. The Giles Jaunes (“Yellow Jacket”) movement has paralysed Paris and some other metropolitan centres for 23 weekends in a row. Despite a near-total absence of coverage by the Establishment media, the movement has aroused intense passions which have threatened to spill over into widespread violence.

The frightening thing about this movement, from the perspective of the Establishment, is that it has seen the coming together of far-right and far-left elements. Because most governments work to play both of these sides off against each other, it’s an ominous sign for the government when they come together. It means that the guillotines aren’t far away.

Some security analysts are predicting that these protests could boil over into widespread riots this European summer, as it becomes possible for the protesters to remain active overnight. Once this happens, the resources of the French Police might become stretched to breaking point (they are already forced to employ 8,000 officers to deal with the weekly protests alone). This is expected to presage increasingly desperate attempts to maintain order.

Ardern has good reason to suspect that some very bad times are coming to New Zealand as well, as a previous article here has discussed. This is partially because she is causing them, and continuing to cause them, through such measures as doubling the refugee quota, which necessarily lead to an increased number of Kiwis going homeless. But it’s partially because of wider economic and strategic factors that she does not control.

It’s likely that fuel prices are going to continue to rise this year because of Donald Trump’s escalating efforts to isolate Iran, as well as the inexorable squeeze of increasing demand and decreasing supply. This will be a worldwide problem, and it is almost certain to exacerbate the French situation.

The price of fuel in New Zealand is yet to cause any protests, but significant discontent can be seen in a number of FaceBook groups, accompanied by phrases such as “GET THE GAS ROBBING BASTARDS OUT OF HERE!!!!!!!” Further price increases might see this discontent develop into the same street protests that have befallen France. Ardern will be getting advice from Macron about how to deal with any such movement in New Zealand.

Another reason why Ardern and Macron are working so closely together is that both are globalists. The two rulers have both made a point of ruling from a global perspective, even if this explicitly harms their own people at the expense of foreigners. Ardern sees herself more as a United Nations-appointed governor of New Zealand than a representative of the New Zealand people, and that sort of arrogance has traditionally served to spark civil unrest.

Both rulers have a clear plan to destroy national sentiments and national culture within their respective territories, and so both rulers are terrified of a nationalist fightback to their globalist schemes. Branton Tarrant put the shits up them in a way that no other action had ever managed, once again proving that the only language the Establishment speaks is violence. Ardern and Macron will be discussing how to reduce the propaganda value of any further such attacks through social media restrictions.

The truth is that France is descending into civil war, and this is happening as a direct consequence of unsustainable globalist policies. Their decision to allow millions of Muslims and Africans to immigrate to France over recent decades, and to claim welfare benefits as if they were native Frenchmen, has left the French workforce with an impossible burden to carry. The fuel taxes that inspired the past six months of protests were the last straw.

Ardern has every intention of going full throttle on the globalism. She has already demonstrated this with her decision to double the refugee quota, and with the way she exploited the Christchurch mosque shootings to force through gun control measures and Internet censorship. She is blatantly a United Nations puppet, and is ruling in a manner that all is all but guaranteed to spark outrage and resistance.

Therefore, Kiwis should have every reason to be suspicious at the news that Ardern and Macron are collaborating closely, because it suggests that New Zealand will rapidly follow France into a state of collapse.

Ardern and Macron, and their fellow globalists such as Justin Trudeau in Canada and Angela Merkel in Germany, will continue to collaborate closely together so as to fulfill their aspirations of subjugating every country in the world to a single world order. In this effort they will be aided, not only by a compliant mass media, but by a myriad of other anti-nationalist interests such as religion.