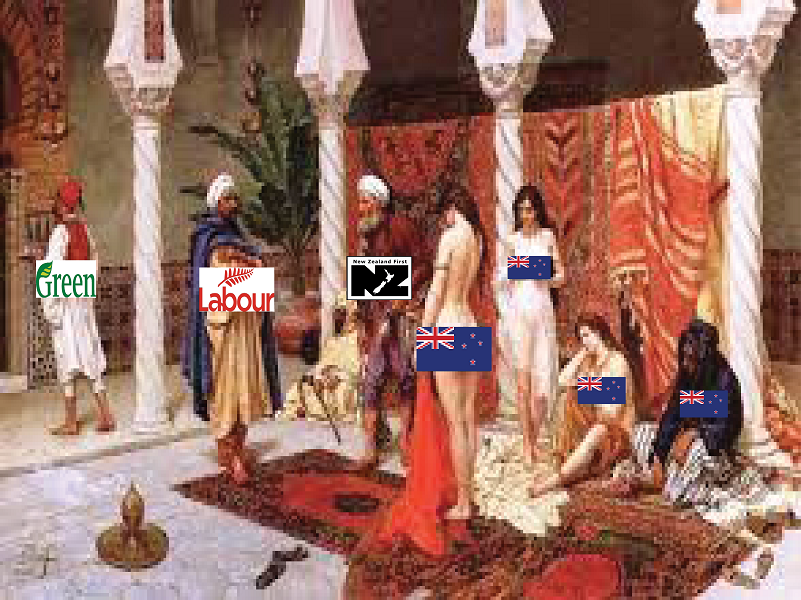 There are many different kinds of corruption in the world’s various political systems. One of the most blatant is the type known as a spoils system. Although this is commonly believed to be a corrupt form of government that we have now moved past, New Zealand still runs on a spoils system, as this essay will examine.

A spoils system is when the victorious party gets to dish out government posts and gifts from the treasury as if they were the spoils of war. Like a conquering Roman legion, all the treasure and booty are piled in a big heap, and then apportioned out by the leaders to their lackeys.

When the spoils system was blatantly in play, an incoming Government would remove many of the previous Government’s supporters from any influential positions so as to install their own. Back then, there wasn’t a public taxation fund to pillage, so the spoils of victory mostly involved jobs in central Government. The position of regional postmaster was a particular favourite.

Although the New Zealand Government would like to give the impression that it fills its positions based on merit and that this merit has been determined after great thought and dutiful application of philosophy, it also runs on a spoils system.

Transport Minister Julie Anne Genter is married to a man named Peter Nunns, who is a principal economist of a transport consultancy firm named MR Cagney. Since taking power in 2017, Government spending on hiring this particular firm has leapt from around $50,000 a year to $246,000 a year, with this money coming from 18 different contracts.

Incredibly, none of these contracts were even put up for tender. The linked article lists a range of excuses for this supposed coincidence, but all of them are just red herrings. The simple fact is that MR Cagney had money being piped into it from the central government, and that the victorious Green Party increased the flow of money fivefold as soon as they were able.

Shane Jones’s $3,000,000,000 Regional Development Fund is another example of the spoils system at play. Jones found himself in charge of the treasury, helped himself to a few billions, and now he’s doling it out in exchange for future favours. Like a jolly brown Santa, he descends from the skies to bring gifts to those who have behaved correctly.

The only other party to come close to this is the Aotearoa Legalise Cannabis Party, at 0.40. New Zealand First is, therefore, very much the party of the countryside, and this $3 billion fund is little more than payback for the support of the countryside at the last election.

Treating New Zealand as the spoils of war is far from something the Sixth Labour Government invented to keep coalition allies onside. It didn’t matter to John Key and Bill English that over two-thirds of the country explicitly said ‘no’ to asset sales, because the majority of National voters fell into the one third who said ‘yes’. The Labour, New Zealand First and Greens voters that made up the two thirds didn’t support National, therefore didn’t get any of the spoils of the National victory.

In a sense, democracy can’t avoid being a spoils system because if the winning party doesn’t reward its voters, it may not get voted in again. The Labour Party rewards Maoris, not because they are communists, but because Maoris vote for them in great numbers: Dan McGlashan found a correlation of 0.58 between being Maori and voting for the Labour Party in 2017.

If voting for the Labour Party didn’t have some kind of payoff, perhaps people wouldn’t do so again. This is more important the more marginalised your voters are, because these are the most likely to abstain from voting. Therefore, whichever party wins the election is all but obliged to dish out the spoils to those who voted for them, because if they don’t then the other side will, and then the other side will stay in power for longer.

There are several problems with this, however. One of the most obvious is that, once it’s apparent that it’s a spoils system contested by Team Rich and Team Poor, there arises a great incentive to disenfranchise Team Poor.

There will always be more poor people than wealthy ones, and so the obvious move for the wealthy, from a game theory perspective, is to demoralise the poor so that they don’t bother to vote. Widespread use of this strategy can have a devastating effect on social cohesion, as America has demonstrated. It could be argued that it was this phenomenon that led to the rise of Hitler during the Weimar Republic.

The only way to get around this is to increase the solidarity of the nation, and the strength of the bonds between each person. This cannot be achieved until the rotten, half-collapsed structures of the previous age are finally razed to the ground. From the ashes, a true spirituality can arise, and this will inspire us to make the right moves elsewhere.