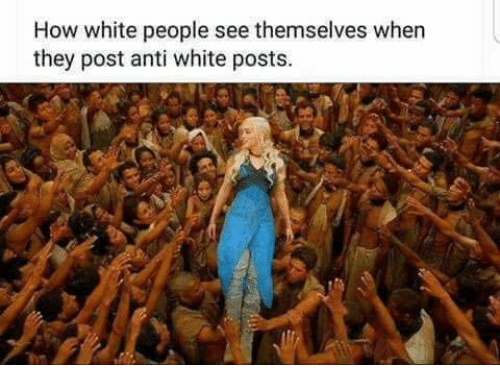 The English language has stolen another word, this time from the Chinese. ‘Baizuo’, pronounced ‘bye-tswaw’, translates directly as ‘white left’, and refers to a particular kind of ignorant and arrogant liberal leftist who seems too ridiculous to be possible, but who actually thrives in today’s world. This article explains.

We are currently at the end of the good times creating weak men phase of history. The West has been so prosperous for so long that most of us can no longer see reality accurately. This is because we are no longer punished for seeing reality inaccurately, because our wealth is such that we still have full bellies, shelter and entertainment – even if we make mistakes, and usually even if we make an endless string of mistakes.

This means that the natural corrective mechanisms that Nature uses to prevent people from becoming too dumb no longer function. Stupidity is allowed to flourish, because it no longer makes us suffer, go hungry or die. The stupid have therefore come to thrive under these new conditions – and stupidity has become the new normal.

Many Chinese Internet dwellers have noticed this in their online encounters with Westerners, and have become fascinated by the phenomenon, labelling those Westerners as ‘baizuo’. Baizuo mentality appears similar to the mindset of the Romans at the time of Nero. It’s a consequence of the decadence brought about by the presence of great wealth over several generations.

There are a large number of people in the West whose entire lives have been lived among plenty. They have no conception of how it is to grow up poor, and so they don’t understand the problems that come with being poor, which are little more than the problems caused by our metabolic needs in a state of Nature.

The major problem with growing up poor is that a poor life is unforgiving. If you damage or lose an item of clothing, getting a replacement is not a simple matter. Paying an unexpected bill doesn’t mean dipping into the savings fund, it means going without somewhere. And God help you if you damage anything valuable, for the punishment for that, usually from parents, can be swift and merciless.

But there is also a major benefit with growing up poor. This is, in the same way some amount of yang always exists even at peak yin, one is forced to see reality accurately. One can thereby develop a perceptual edge over one’s otherwise more privileged fellows.

The baizuos no longer see reality accurately, because they no longer understand Nature. As such, they no longer believe in Nature. They do not believe that men and women are different, and they don’t understand that the various groups of people around the world are different. The joke is that they think food comes from supermarkets.

The baizuo phenomenon is essentially the mass psychosis of a generation raised in such wealth that they could get away with losing touch with reality. Unlike generations raised in poverty – such as the Chinese – the vast majority of Westerners under the age of 40 have been raised in such a total absence of poverty that they have forgotten entirely that life on Earth is fundamentally an eternal struggle.

There are several facets of this phenomenon that the Chinese find especially fascinating, as does any rational Westerner trying to make sense of his fellows.

One is the obsession with political correctness, to the point of the baizuo’s own detriment. Whereas the Chinese loves to make jokes that defy the ruling authorities, and whereas most Chinese have a VPN to evade Government censorship, the humourless baizuo appears to desire more authoritarianism and more free speech restrictions and crack downs.

Another is the astonishing, almost child-like naivety when it comes to the dangers of the world. The majority of baizuos are asleep and dreaming when it comes to the issue of mass Muslim and African immigration. They absolutely refuse to listen to the experiences of people who have seen the deleterious effect of mass Muslim and African immigration on other nations, especially those in Europe.

Baizuos believe that all of the poor people of the world truly yearn for peace and tolerance and understanding for all, if only we would give them the opportunity to move to the West. That this has never been the rule in history doesn’t bother them, for they don’t believe in history any more than they believe in biology. They genuinely believe that all other groups of people are just like them, and think just like them.

A third is the arrogance with which the baizuo is stupid. In a state of Nature, stupidity is punished with pain, so that people who demonstrate stupidity soon become humble. The stupidity of the baizuo does not get punished, and, as a result, baizuos come to think they are right about everything all the time. Their arrogance is unchecked.

Whereas a well-travelled person could talk to a typical Chinese about the problems caused by Islam and be understood, the baizuo response would be to shout ‘racist’ and imply that the traveller must have been biased against Muslims all along, their observations merely confirmation bias. Most baizuos have never travelled outside of their own language zone, but are still conceited enough to think they know everything about the world.

The baizuo mentality, then, can be thought of as a form of slave morality. The baizuos are the weak men who lead to bad times, but their influence is already peaking. This means that the bad times are coming, and with their arrival the baizuos will disappear.