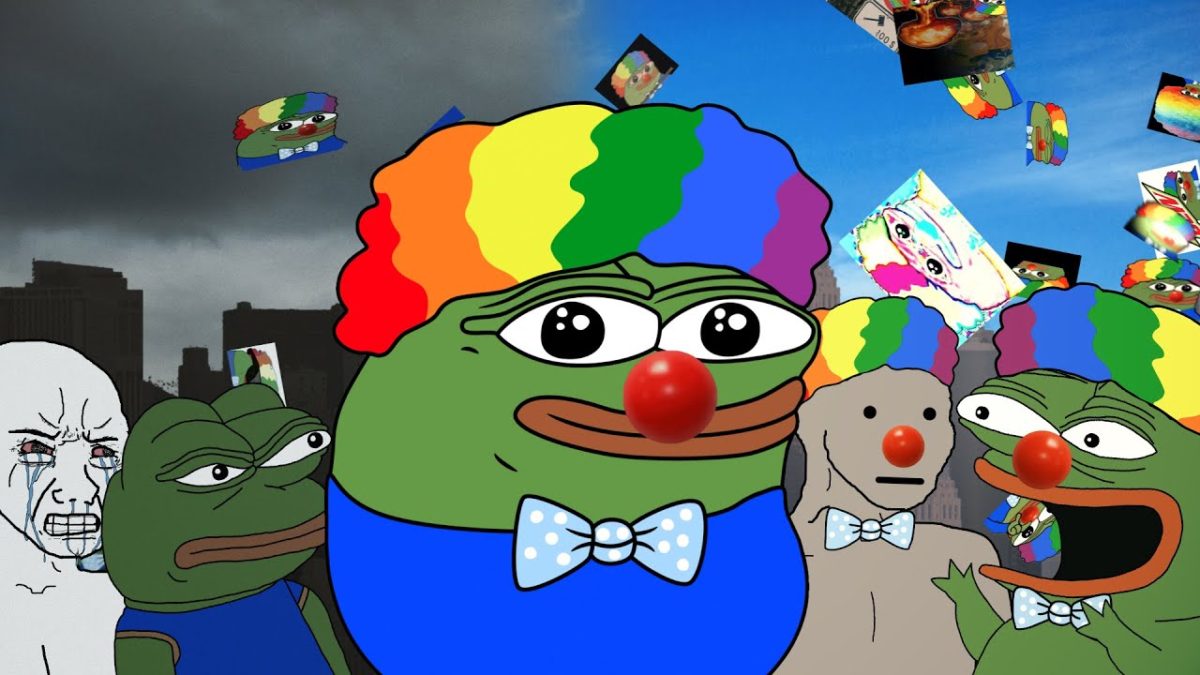 There’s a new meme making waves in cyberspace. Based on the original Pepe the green frog meme, this new form adds a multicoloured clown wig, a red clown nose, a novelty bow tie and a eerie, distant smile. The meme is normally presented with the word ‘Honk’ or similar. This essay explains the honk meme.

The original Pepe meme is how an entire subculture has found a manner of expression. This bland-looking rubber-lipped frog has come to stand for an entire generation of everymen, his various expressions of rage, fear, anger and bliss the way that generation signals emotions in Internet groups. Many threads on Internet message boards start with a picture of Pepe, and these images portray an incredibly broad range of sentiments.

Pepe represents the travails of a generation that finds itself doing much worse than its parents did. The Millennials are discovering that their standard of living is lower than the generation before it, and much lower than that of the Boomers. Studies show that wage workers in Western countries have lost most of their house-buying power over the last few decades, and it looks set to get worse.

So Pepe’s new appearance, in the form of the Honkster, signals a dark turn in the collective mindset of the young.

Essentially, the idea is that we now live in Clown World, where nothing makes any sense any more. Our society is no longer a real society, where people care for each other on account of belonging to a wider kin group, but a parody of one, in which the old have all the wealth and power and aspire to suck as much life out of the younger generations as possible. We’ve strayed so far from our founding principles that we’ve lost our moral compass.

The sheer ridiculousness of so much of everyday life, it is reasoned, can only be explained with the idea that the normal timeline of Planet Earth deviated from its previous course at some unknown point in the recent past, and entered this place called Clown World. According to this theory, the Planet Earth is now in a different dimension of reality to the one it was in up until a few years ago. Therefore, the ordinary laws of psychology, sociology and political science no longer apply.

In Clown World, the clowns are in charge. This is nowhere more easily understood than by observing the total absence of qualifications among our ruling classes. Donald Trump in America, Theresa May in Britain, Justin Trudeau in Canada and Jacinda Ardern in New Zealand all appear uniquely hopeless. They blunder clumsily from one slapstick mishap to the next, and they appear intent on making the world into as big a circus as possible.

In Clown World, there is no longer cause to feel any hope. The world has failed. Not only has it failed, but it’s failed so badly that it seems like it was really just a joke the whole time. Nothing this absurd could possibly have been taken seriously by so many people, and therefore the only rational thing to do is to throw one’s head back in laughter as the clowns make honking noises.

The slack smile of the Honkster is not the smile of joy. It’s not even the sardonic smile of a generation that knows their parents traded away their inheritance for a pittance. It is the drugged smile of oxycontin, anti-depressants and anti-psychotics, pharmaceuticals being the only way to cope the fact that our world is a brave new one, in which people’s suffering has been medicated away to reduce their propensity to rebellion.

In this context, it has been said by an anonymous wit that “The world ends not with a bang, and not with a whimper, but with a honk.”

The honk is the look on the face of the Green Party supporter when she is gang raped by the same refugees she voted to open the borders for.

The honk is the sound the key makes in the lock when it turns to jail a man for criticising Police inaction in the face of reports of Islamic rape gangs operating in their area.

The honk is the cry of helplessness of a hundred million young people all over the West, drawn out so long that it has taken on a different character entirely, morphing from despair into a demented humour.

Realistically, this honk ought to be a terrifying sound. The discordant honking is the fanfare of a generation that has not only lost hope, but which has also lost meaning. In Clown World, it makes no sense to hope for anything, because there is no relationship between hoping for things and getting them. One cannot set one’s will to a goal and achieve it here, because nothing makes sense. The whole world is against one.

As the economic situation worsens, the face of the Honkster might be replaced with something less humourous. The bitterness inherent in the Clown World meme, and the nihilism it reveals, suggests an unstable and unpredictable environment. The Honk meme might be a sign that the social fabric is starting to tear.