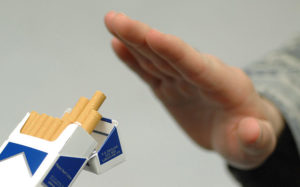 Interestingly, the Electoral Profiles detail the number of people within each electorate who are regular smokers, who are ex-smokers, and who have never smoked. These stats, when added to the correlation matrix, tell us about the tobacco smoking habits of New Zealanders.

Already from this, some clear trends suggest themselves – in particular, that a Kiwi is more likely to be a regular smoker the harder their life is.

Returning to the idea that people tend to smoke more the worse they are doing, we can observe that the correlation between being a regular smoker and being on the invalid’s benefit is 0.85, and with being on the unemployment benefit it was a whopping 0.87. This is probably because there is little else to do on a long-term benefit other than to smoke!

Also related to this idea, we can see that people doing well are less likely to smoke. Even merely being a student, which is to say, still young and poor but at least hopeful, is not significantly correlated with being a regular smoker. It is, however, correlated with never smoking, even if it was a very mild 0.25.

Predictably, given the stats detailed thus far, the working class professions tend to be the ones that correlate positively with being a regular smoker. Agriculture, fishing and forestry (0.35), Construction (0.37), Electricity, gas, water and waste services (0.42), Transport, postal and warehousing (0.52) and Manufacturing (0.58).

And so, the middle and professional classes are inversely correlated with being a regular smoker. These were Information media and telecommunications (-0.34), Rental, hiring and real estate services (-0.38), Financial and insurance services (-0.48) and Professional, scientific and technical services (-0.56).

Finally, there is no significant correlation between any of being a regular smoker, being an ex-smoker and never having smoked on the one hand, and being either male or female on the other. Despite this, the numbers suggest that more females than males are regular smokers.