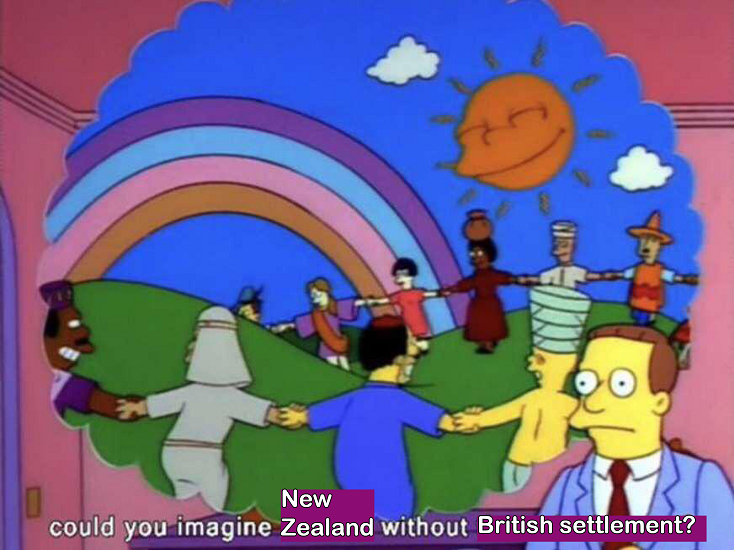 With news that the New Zealand Government will make the teaching of New Zealand history compulsory in schools from 2022, many are wondering what form this history will take. Napoleon said “History is a set of lies agreed upon,” and many Kiwis are skeptical that this new history will be accurate and fair. These concerns are warranted. This essay summarises the New New Zealand History in six words: White Man Bad, Brown Man Good.

The move by the Sixth Labour Government has been heavily criticised by commentators such as Anarkiwi, and for good reason. Government initiatives to “tell the real truth about history” always end up being indoctrination campaigns, launched to brainwash the population into supporting a particular agenda. The history that will be taught in New Zealand schools will be a set of lies agreed upon (although your input will not be sought).

Central to the New New Zealand history is the idea that there was no benefit to the Maori from colonisation, only losses. Maoris did not benefit from medicine, or a justice system, or from sanitation, or from infrastructure, or from technology. All of these things are either presumed to have no value, or it is assumed that Maoris would have developed them anyway without British help.

This New History will follow a Rousseauean conception of human nature, in which uncivilised man is a “noble savage”, morally superior to civilised man. The civilised man is, according to this conception, much like the stereotypical Jewish merchant. He schemes, he swindles, he extorts and steals, and he does so without shame or scruple. Uncivilised man, by contrast, lives in a state of perfect harmony with his environment.

In the New New Zealand History, civilisation descended on these isles like a black wave of corruption and evil. Technology, law and order are considered to be negative things that lured the Maori out of his state of innocence. This allowed for land to be swindled out of the Maori tribes much like candy from an innocent baby in the crib.

Part of this New New Zealand History will be the enshrinement of the special status of Maoris as those people who live here by right, whereas every other race has a conditional residency status contingent on “upholding the Treaty”. The idea is that the continued presence of non-Maoris in New Zealand is dependent on the permission of Maoris. This will see an increase in the use of vocabulary like ‘tangata whenua’ and ‘tauiwi’ (the latter being the Maori equivalent of ‘goyim’ or ‘kaffir’).

Anything that doesn’t fit the White Man Bad, Brown Man Good narrative will simply not be taught.

The Musket Wars, during which 40,000 Maoris were killed by intertribal wars launched by Ngapuhi chief Hongi Hika, will be glossed over, summarised or simply ignored. One can confidently predict that the New New Zealand History will begin in 1840, as if New Zealand had come to Earth already perfectly formed, a last-minute addition direct from the mind of God.

Another thing that won’t be taught is that some 150,000 Maoris have emigrated away from New Zealand to Australia, which offers the same wealth and prosperity that colonisation brought to New Zealand, only more so. Neither will it be taught that Maoris are, on average, five times wealthier than the average Tongan.

Tonga was never colonised, and the fact that Tongans willingly move to New Zealand in far, far greater numbers than Maoris willingly move to Tonga is solid evidence that Polynesian natives prefer the benefits of Western life to the sort of life that existed previously. Actions speak louder than words, after all, and Polynesians have clearly shown with their migration decisions that the Western life is better.

Neither will the ecological consequences of Polynesian settlement get a mention. We won’t hear a word about the extermination of pre-existing megafauna such as the moa and the Haast Eagle. Neither will we hear anything about the fact that Maori settlers in the South Island destroyed 40% of its forest cover within the first 200 years.

The Parihaka story (or at least the Green Party version of it), on the other hand, will play a central role. This story paints Maoris as Gandhi-like figures of peace, and the British as Genghis Khan-like murderers and rapists, and is therefore emblematic of the New New Zealand History. Doubtlessly we will see renewed calls for a Parihaka Day, which is to be another grievance day.

Genuine grievances will not be mentioned if that doesn’t fit the agenda. The destruction of Maori religious and spiritual traditions by Abrahamists suits the Government fine, as does the imposition of recreational alcohol culture on a people who had no genetic resistance to it (and the criminalisation of the recreational cannabis culture that they preferred). Both of those things serve the agenda of tightening control on the thoughts and behaviours of the people.

The actual purpose of the New New Zealand History is manyfold, but it achieves two major objectives from the point of view of those bringing it in.

Second, it divides the rest of the population between those who tell the truth and those who are on board with the new fashion. Inevitably, those who maintain that Maoris benefitted from colonisation will be decried as old-fashioned and out of touch with the “new learning”. They will be pilloried as racists and bigots and we will hear that society would be better without them.

The New New Zealand History is, like most United Nations-driven novelties, a set of lies intended to further a globalist agenda. It’s closely related to the movement known as Brown Communism, which is a form of slave morality intended to divest white and Far East Asian people of their wealth. Like most sets of lies, the way to counter it is to remain steadfast to the truth, no matter how unfashionable that becomes.