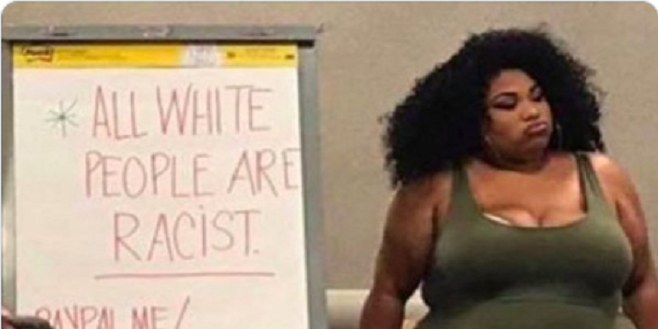 Christian guilt-trippers like to emotionally abuse anyone they can with a concept called Original Sin. According to Christian dogma, all human beings are inherently guilty of sin as soon as they are born, and are obliged to take action to make up for this. As this essay will explain, this concept has mutated, in recent decades, into the concept of racism.

Otherwise known as “ancestral sin”, Christian dogma has it that humans have been afflicted ever since Adam and Eve ate the fruit from the Tree of Forbidden Knowledge and were kicked out of the Garden of Eden. This is why it is said that “All have sinned and all have fallen short of the glory of God.”

The idea is that all humans are automatically guilty of this Original Sin, by virtue of being descended from Adam and Eve. This state of guilt exists until they bow the knee to Jesus Christ. The concept of Original Sin means that any person, how matter how righteous, can have a guilt trip laid on them about how they haven’t done enough.

Guilt-tripping people about being sinners has long been proven an excellent way to manipulate and swindle them, as cashed-up priests have known for millennia. If you can convince a person that your approval is necessary to avoid punishment in the afterlife, you have effectively enslaved them. They will do whatever you tell them, and give you whatever you want from them, out of a fear of being condemned to Hell.

In today’s world of near-total atheistic degeneracy, this idea of Original Sin is no longer convincing enough to manipulate people. However, the basic human brain circuitry that makes us vulnerable to guilt trips still exists, and our rulers still exploit that vulnerability. The difference is that, now, our rulers have replaced Original Sin with racism, and the fear of punishment in Hell with the fear of ostracisation.

If you are white, all of your wealth, all your joy, everything good in your life comes from racism and the racist abuse of non-whites.

If you have a roof over your head, it was because your ancestors stole it. If you have a good job, it’s because a non-white was unfairly looked over for the position. If a white nation is wealthy, it’s because of exploitation of either natives, refugees or non-white trading partners. Everything good in a white person’s life is the fruit of racist evil.

Being educated is no justification for wealth, either.

Wealth doesn’t come from hard work or education – it only comes from exploiting the oppressed. Therefore, the only way to solve the problem of racism and the economic inequality it has created is to give non-whites the opportunity to exploit whites. All non-white exploitation of white people is therefore justified, as reparations for past oppression. A white person would only complain about it if they were racist.

By way of laying this massive guilt trip on white people, modern leftists have been able to assume vast control over Western society. Westerners have been so beaten down with shame for their Original Sin of racism that the mere accusation of it is often enough to make someone persona non grata. Speech, writing and thought is now heavily policed to make sure it doesn’t fall foul of those who have appointed themselves our moral guardians.

Defeating these manipulations requires the same strategy that defeated the manipulations of Christianity, i.e. a combination of cold reason and genuine spirituality. This will lead to the healthy self-esteem that is necessary to defend oneself against guilt-tripping and emotional abuse.