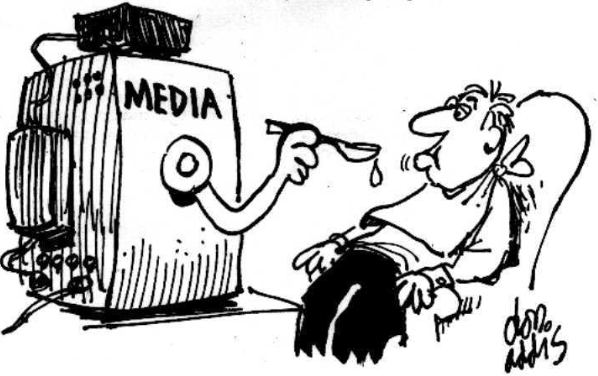 A recent Stuff article reported that mainstream media outlets are colluding to censor reporting of Branton Tarrant’s trial. Stuff, TVNZ, Mediaworks, NZME and RNZ have agreed to not mention Tarrant’s name, nor will they quote from his manifesto. As this article will show, this is far from the good news it’s being portrayed as.

Purportedly, their reason for doing so is to not allow “white supremacist or terrorist ideology to be championed”. The image they are painting of themselves is one of honourable restraint in the service of the public good. In reality, they are simply doing this to further the globalist agenda of their owners.

They have made a special effort not give airtime to Tarrant but, incredibly, they are happy to give plenty of airtime to Hillary Clinton, the Butcher of Libya. Clinton’s orchestration of the 2011 destruction of Libya may have led to 100,000 deaths in the ensuing chaos. The clip of her gloating about the murder of Gaddafi is one of the most grotesque displays of psychopathy ever captured on film.

How can it be that a man who kills fifty is too evil to mention and must be deplatformed to the maximum degree possible, whereas a person who kills a hundred thousand is not only given a regular platform but is spoken about as an innocent victim being oppressed by the Trump Presidency?

The answer is that Clinton’s actions please the international banking and finance interests that own the mainstream media, whereas Tarrant’s (like Trump’s) do not.

The Government of Muammar Gaddafi had completed a project called the Great Man-Made River, which had been achieved without any financing from foreign banking interests. This was of great concern to those interests, who see self-funded infrastructure as a threat to their profits, in much the same way that a slave escaping the plantation is a threat to the plantation owner’s profits.

Clinton’s destruction of Libya, therefore, taught everyone a lesson about building infrastructure without giving a cut to the banking mafia.

Branton Tarrant, on the other hand, raised racial tensions at a time when the globalists are trying to import as much cheap labour as they can in the guise of things like helping refugees. Now that society is based on the idea that consumers are assets and consumption the engine of economic activity, the desire of the ruling classes is to grow their population as high as possible, in the same way that cattle ranchers seek to grow the size of their herd.

The problem with this approach – although this is still denied – is that jamming together incompatible cultures from different parts of the world inevitably leads to some level of conflict. This is especially true when members of some cultures gang together to rape hundreds of local children, as occurred in Rotherham. The Rotherham rape gang was one of several Muslim rape gangs mentioned in Tarrant’s manifesto as an impetus for his action.

More globalism, while it means more profits for the international banking and finance interests that service the housing industry with mortgages, also means more ethnic tension and less social cohesion. Even though this damages the nation, it makes it possible to extract more wealth from the nation, and so there are several forces that work in hand to suppress the tensions that arise from globalism.

The mainstream media has changed role. Where it was once a critic of the Government and the people’s voice holding that Government to account, now it’s an entity that works alongside the Government to manage public perceptions. John Key was portrayed as the financial genius that shielded the nation from the Global Financial Crisis, and Jacinda Ardern is portrayed as the angel that is shielding us from white supremacist terrorism – two personality cults deliberately created by propagandists.

The brutal reality is that the mainstream media and the Government are working side-by-side, as proven by the fact that the former was given a top secret list of the 100 or so people being surveilled by the Police in the wake of the Christchurch mosque shootings. This is also why the mainstream media refuses to mention the name of Vinny Eastwood in the hit pieces that target him, despite that Eastwood is responsible for the deaths of no-one.

Anyone who questions the agenda needs to be terrorised into submission and silence. Eastwood questions the narrative, and in doing so weakens its propaganda power, and therefore he’s a bad guy. The article above refers to him as a “conspiracy theorist” – a loaded term chosen to delegitimise. Leaking a list of surveillance targets to the media intensifies the pressure against those people and increases their sense of paranoia.

In accordance with this, the mainstream media will work to negate anything Tarrant might say that goes against the agenda. They will certainly not report on the fact that Tarrant was motivated to action by the various Muslim rape gangs in England and by the Drottninggatan truck attack, because they don’t want to legitimise anti-immigrant sentiment. They will say nothing that goes against the story that Tarrant was driven mad by his own moral failings.

Anti-immigrant sentiment is terrible for business because it both limits the importation of cheap labour, which means that wages go up, and lowers demand for housing stock, which means that rents and mortgages go down. It is because of these crude economic concerns and the marriage of convenience they create, and not because of Jews or any Marxist conspiracy, that the Government and the mainstream media are working so closely together.

The simple truth is that, being owned by the same international finance and banking interests, the New Zealand Government and the mainstream media work together to serve those interests. Individuals in both institutions must do so or they will be fired. This they do by passing laws and broadcasting propaganda intended to serve the globalist agenda of open borders and the destruction of national and regional cultures.

This is why they collude to prevent the spread of terrorist propaganda when it supports a nationalist narrative, but are happy to spread terrorist propaganda when it supports a globalist narrative. Perhaps the most awful example was the weapons of mass destruction lie promoted by Jacinda Ardern’s mentor, the Iraq War criminal Tony Blair, a lie which killed a million people and for which no-one was ever held to account.