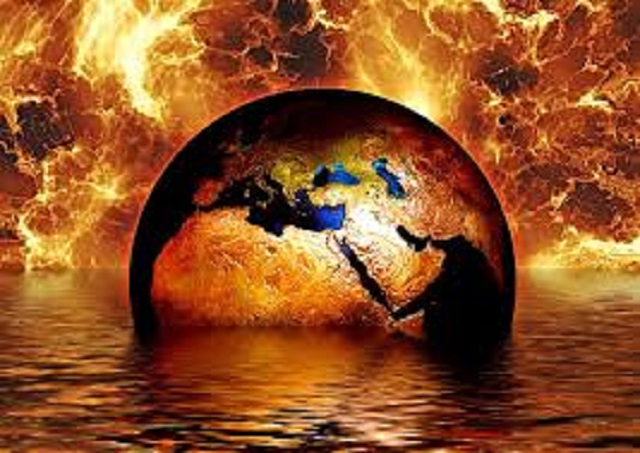 Were the hippies right all along? The counter-culture that arose in response to the Cold War championed many things that made them hated: free love, a return to Nature, a rejection of materialism – and cannabis. This essay examines the possibility that we would have survived if only we had listened, and that cannabis prohibition doomed the human species to extinction.

A recent scientific report on climate data paints a grim picture for humanity’s future. Titled “Deep Adaptation: A Map for Navigating Climate Tragedy”, the paper lays out the stark fact that we have polluted the planet so badly that future chaos is inevitable. The truly baffling thing is we knew this all along. The science that explained what would happen to the planet if we continued to burn fossil fuels was established in the 90s – the 1890s.

So why didn’t we listen?

For the vast majority of human history, we lived in a close enough balance with the environment to not destroy it. Although there were certainly cases of localised destruction – the firestick farming method of the Australian Aborigines being perhaps the foremost – it was only recently that humanity developed the capacity to destroy the environment of the entire planet.

Somewhere along the line, we lost touch with the rest of the biosphere. Perhaps what initially kicked it off was following Descartes’s belief that only human beings were truly conscious. Maybe it was even further back, to Aristotle’s injunction that humans occupied the highest place on the food chain. In either case, what really pushed our ignorance into critical territory may have been the prohibition of cannabis.

Although the idea is commonly laughed at nowadays, cannabis is a spiritual sacrament, and has been used as such for thousands of years, particularly by the common ancestors of the Indo-European peoples. Evidence that ancient Scythians hotboxed tents with cannabis smoke predates writing in the area, Hindu and Vedic culture is replete with references to it, and even ancient Taoist alchemists considered it a major plant medicine.

An example of the kind of insights that people come to from cannabis use is that all creatures are part of one collective consciousness, which is more fundamental than time and space and is not constrained by them, and which is therefore eternal, and all of the other spiritual ideas that people nowadays consider to be mental illness. We’ve lost touch with these insights in the pursuit of ever more material wealth.

The real mental illness, it could be better argued, is on the part of those who don’t use cannabis.

It is the non-hippies, who don’t use cannabis, who buy expensive toys that are just plastic hunks of shit, and who drive around in enormously polluting vehicles, and who spend tens of thousands remodelling their house just for social status, who have wrecked the environment. A civilisation that destroys its own environment in pursuit of producing trivial, fleeting material pleasures could correctly be said to be insane.

If one understands that cannabis is a spiritual sacrament that used to keep humanity in touch with the natural world, and that this loss of contact with the material world has caused a climate crisis that may prove to doom us all, then it can fairly be argued that cannabis prohibition led to the destruction of humanity. If we’d just sat around smoking weed instead of working hard and aspiring to own ever-larger piles of crap, the planet might have survived.

If we had never contracted the disease of workism, we never would have thought it a good idea to drive miles to work, burning fossils fuels all the while, just to make three times more money than we actually need, and that just so we can buy piles of plastic crap and home improvements that never get used. We would have learned to appreciate the natural world more, instead of seeing it as something to be consumed on the road to economic growth.

Any hippie could tell you that the philosophy of eternal growth is the philosophy of the cancer cell. You don’t need an ecology degree to understand that an organism or group of organisms cannot keep growing indefinitely and stay in their niche. Either they stop growing or they expand into other niches. The ideology of eternal economic growth was inevitably going to hit its limit in one way or another.

If that hippie was of the more thoughtful kind, they might be able to tell you that such philosophies arose because people started to become afraid of death. Because cannabis has been a spiritual sacrament for our ancestors for so long, its prohibition in the early 20th century had the effect of, quite literally, separating us from God.

It’s possible that, if cannabis had never become criminalised, we never would have lost touch with Nature enough to even think about such a thing as building a strategic naval force that spanned the entire globe, sucking up enormous amounts of coal and oil as it did so, to the point where the biosphere collapsed. Ironically, if we had lived as the filthy, lazy, crazy hippies had suggested, we’d have had a better chance of passing through the Great Filter.