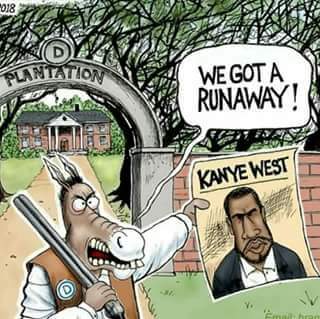 Most people today are horrified by the idea of chattel slavery. The practice is widely considered one of the most vile and evil institutions in human history, and for good reason. What most people fail to realise, however, is that we are still slaves living on a big plantation, but instead of cotton it’s all about taxes.

The truth is that our societies are little different to the cotton and sugar plantations of the antebellum American South. We are plantation slaves. The owners of capital are the same today as they were in the 1840s, and the overseers they employ are also little different. The main difference is that we are enslaved psychologically instead of physically.

This is why it was said that Kanye West had “left the plantation” when he began to repudiate the mainstream media’s relentless attacks on Donald Trump, as well as the implication that black Americans ought to always support the Democrat Party. The world view inculcated by the mainstream media is as constraining as any cotton or sugar plantation, and we’re the slaves on it.

The ideal is to get the slave to willingly produce tax money. The main method of achieving this has been to create a culture where possession and acquisition of material goods is considered the meaning of human existence, with ostracisation the penalty for anyone who disagrees. With this achieved, the people within that culture will work long hours for the money necessary for all this stuff, and that labour can be taxed without fear of resistance. The more work, the more tax.

If a slave is unwilling to produce tax money, the response of the overseers is similar to that taken by the overseers on a cotton plantation.

The initial reaction is abuse. The cotton plantation overseer would use physical abuse, in the form of whips. The thought plantation overseer, not being able to use corporal punishment, uses psychological abuse instead. This usually takes the form of calling the slave lazy, or a malingerer. The overseer will create the impression that the slave’s unwillingness to produce taxes for their owner is a moral failure on the part of the slave, something they should be ashamed of.

In the 1800s, a medical condition existed called drapetomania. This was a a diagnosis that could be given to slaves that had run away from their plantations. It referred to a kind of mental illness that impelled its sufferers to not want to be enslaved. The doctor who came up with the concept said “proper medical advice, strictly followed, this troublesome practice that many Negroes have of running away can be almost entirely prevented”.

Another fictitious mental disorder that was used to justify slavery was called dysaesthesia aethiopica. This was the Slavery Age equivalent of what doctors nowadays call “amotivational syndrome”. The idea was that the unwillingness to be treated as a slave must be a mental illness that had to be corrected. After all, a mentally healthy slave would accept his position and work hard for the master.

We can see the same logic applied by psychiatric doctors nowadays. Individuals who are disinclined to participate in society, on account of its overwhelming shitness, are diagnosed with mental illnesses similar to drapetomania. Schizotypal personality disorder is one such – the withdrawal from social contact is labelled a mental illness and medicated. Antisocial Personality Disorder and schizophrenia are other common reactions to enslavement, also pathologised.

The overseers and plantation owners can never, ever admit that the lives they have constructed for us are grossly unnatural, and that this unnaturalness is so severe that it has caused most of the mental illness that we now suffer. They can never admit that removing people’s agency over their lives causes a frustration that ends up becoming expressed as depression or homicidal rage.

The only way forward for those of us on the thought plantation is to liberate our minds, even if the plantation owners and overseers respond with abuse. Crucial to this is a sense of solidarity with other slaves, in which we support each other to defy the overseers and the owners. We must work for each other, and not for the sake of the plantation.