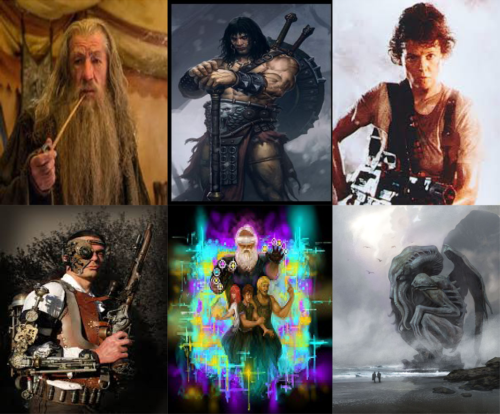 High fantasy fiction matches up to cannabis. Lord of the Rings contains a couple of sly allusions to cannabis use, most notably when Saruman admonishes Gandalf for his “love of the halfling’s weed” while explaining how Gandalf missed a clue that he should have noticed. The scene in the film Fellowship of the Ring where Gandalf and Frodo sit above the drunken revellers and smoke some magical substance from a pipe is one familiar to most stoners.

Some of the experiences that Elric has in the Stormbringer series of novels by Michael Moorcock were also very likely to have been cannabis-inspired. There’s something about Elric’s experience of having an extremely powerful ally that couldn’t really be trusted that speaks to the paranoia that sometimes comes with the cannabis experience.

The sword and sorcery style of low fantasy matches up with psilocybin mushrooms. It’s unlikely that Robert E Howard took any magic mushrooms before writing any of the Conan the Cimmerian stories, but the protagonist’s many adventures in dark, subterranean caves and inside fantastic towers and castles are reminiscent of the depth and range of sometimes terrifying personal insight that often comes with mushrooms.

The Forgotten Realms universe of Dungeons and Dragons adventures, with their massive, dark forests full of elves and goblins also relates closely to the vibe of the psilocybin mushrooms experience. The reason why magic mushrooms enthusiasts are encouraged to try taking five grams in silent darkness is because it leads to exploration of a fantastical inner world, and going down into the subterranean to arise wealthier at some later point is a regular theme.

Most of what sells as science fiction could have been inspired by LSD. Stories like The Demolished Man, with a very strong psychological content, harken to the disintegrative effect that psychedelics can have on the personality. The main character of The Demolished Man, somehow between protagonist and antagonist, ends up having his personality completely demolished (and then rebuilt) as punishment for his crimes, reminiscent of how the psychedelic experience can destroy a person and then build them back as something stronger than before.

This sense of twisted psychology comes through also in the writings of Philip K Dick, who had himself tried LSD. Psychedelics might have inspired the plot of Ubik, in which the character Glen Runciter experiences a believable but bizarre reality while his physical body is “on ice” in a cryogenic chamber. Wondering if you’re really dead or alive is the kind of thing that LSD can make happen to you.

The almost schizophrenic belief in a hidden real world outside of this merely simulated one is a mainstay of cyberpunk literature, and is similar to the impressions one gets on DMT or salvia divinorum. For thousands of years, human shamans have been having experiences of dying to the physical world and being reborn to the real one, like Neo did in The Matrix. In that regard, The Matrix is really a retelling of the ancient mystery school teaching of death and resurrection, reclothed in 21st-century technology.

A description of what might be the spirit of the DMT experience is given in the ANZAC cyberpunk novel The Verity Key. In the chapter Mindknife, the protagonist Jonty Gillespie has his perception altered by ingestion of a drug called Cinque Nuevo, which briefly blasts his consciousness out of his physical body and into an entirely external dimension that is occupied by beings that take the form of balls of light, while mechanical constructs that might be metaphors churn around him.

The datura experience is pretty similar to what befell many of the unfortunate researchers in the Cthulhu mythos of H. P. Lovecraft. A disquieting sense of things not being quite as they should be grows into an intense paranoia that leaps at every shadow and from there to total psychological collapse at the raw horror of reality itself. Alien beings that seem to have come to Earth just to torment you is the kind of thing you’re dealing with in either case.

Datura is also the kind of drug that fits the background of weird horror stories such as those in His Master’s Wretched Organ. Talking to grotesquely deformed entities like Mr. Creamfeather and eating tobacco cakes are the sort of horror that, once experienced, leaves a person never quite the same again. The concept of ordeal rituals that leave you wiser for having suffered come to mind here.

Others are arguable. The steampunk of The Rocketeer might suit opium, the boo-yah aggression of Starship Troopers might suit mescaline, and the gritty military noir of the Altered Carbon series might be the old classics of caffeine, nicotine and alcohol.

It might be hard to read any speculative fiction on most of these drugs, because a person on them is more likely to be occupied with the inner theatre of the thoughts in their head than a book in the external world. However, it might be possible to have a richer experience of reading speculative fiction after having tried some of them, because they could open your awareness to realms of thought previously unimagined.