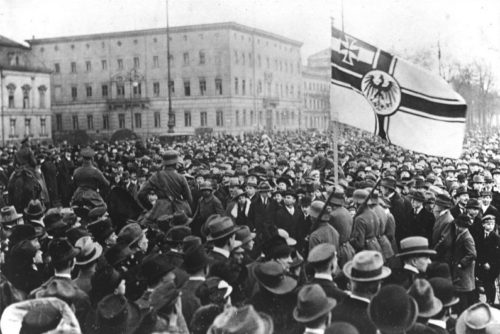 The 1920s were a tumultuous time in the Western World. Rebuilding from the carnage of World War One, Westerners – especially Europeans – found themselves unable to decide on a peaceful way forward, and this absence of agreement expressed itself violently in the streets. This essay examines whether or not we’re looking at a repeat.

The German defeat in World War One saw a revolution that swept away the monarchy of Wilhelm II, replacing it with a fragile democracy known as the Weimar Republic. The well-founded fear of those who wanted peace in Central Europe was of a civil war between the socialist forces that had inspired the revolution and the reactionary conservatives representing those who held power and wealth under the Second Reich.

Communist agitation, inspired by the Russian Revolution of 1917, was eventually put down by an alliance between the ruling Social Democratic Party of Germany and right-wing paramilitaries known as the Freikorps, and peace finally reigned.

But it wasn’t to last.

The severe economic problems of the 1920s, coupled with a sense of humiliation at the restrictions imposed on Germany by the victorious Allies, alongside continued communist agitation and growing nationalist sentiment, meant that chaos would soon usurp the shaky peace.

The far left didn’t like the Weimar Republic because they considered it to be holding back a communist revolution, and the far right didn’t like it because they preferred the authoritarianism that existed under the previous monarchy.

This state of affairs is very similar to what faces the West today.

Communist agitators have made a significant impact on Western society in recent years. They have successfully destroyed belief in tradition, resulting in plummeting birthrates, mass immigration that has changed the make-up of Western nations forever, and widespread and righteous anti-white racism.

Nationalist agitators have also made significant strides recently, most notably with the election of Donald Trump to the American Presidency. Many Trump supporters are shameless authoritarians, and much of the appeal of this authoritarianism lies in the belief that they are protecting the West from degeneracy.

The surge in both groups of extremists has led to increasing levels of street violence in America, most notably at the ‘Battle of Berkeley’ and then last weekend in Charlottesville. A sense of unfinished business lingers over both of these incidents, and after a fatal terrorist attack in Charlottesville the desire for revenge is a factor predicting further bloodshed.

The left opposes liberal democracy because it wants to shut down free speech and free expression. The Communists believe that they need to control the narrative in order to bring about revolution, and this demands that even scientists like Richard Dawkins be denied the right to speak at a university.

The right opposes liberal democracy because it wants to shut down the free movement of people. The Nazis believe that the West is sinking into chaos, anarchy and degeneracy, and only by rallying around authoritarian figures can a sufficient degree of order be imposed upon society.

Both of these sides, therefore, have grounds to eschew dialogue and democracy in favour of raw assertions of power in the streets.

Also foreboding is the belief, shared by many commentators, that the economic hardships of the Weimar Era laid the foundations for massive German discontent with the idea of democracy, which paved the way for extremists like Adolf Hitler.

The West has not really recovered from the Global Financial Crisis of 2008. Employment prospects are poor all across the West, with the dream of owing your own home now out of reach for most young Westerners, and working-class resentment at the amount of money spent on refugees risks growing into further discontent.

Perhaps all of this is building towards another climactic struggle.