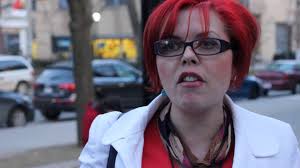 Feminazis and cucks are always screaming about toxic masculinity. The concept, according to Wikipedia, “describes standards of behavior among men in contemporary American and European society that encourage domination and control of others while being opposed to intellectualism and emotional sensitivity.”

It’s apparent to any reasonable person who reads this that the concept is fundamentally dishonest, because nothing about the behaviours described above are exclusive to either men or to Westerners.

The concept is fundamentally dishonest because it is not intended to describe any part of reality in a scientific sense. The intent of the concept is to advance the political goals of the person advocating it, not to contribute to the sum total of human knowledge through intellectual inquiry.

However, as above, so below: the concept of toxic masculinity, valid or otherwise, has a mirror image in toxic femininity.

The nature of the masculine is to go outwards and into the material world. Naturally this manifests as a desire to put the material world to order. This is not the same thing as trying to control the outside world, although the two do overlap.

The characteristic emotion of masculinity, then, is anger, and this manifests as physical violence, which basically everyone recognises as bad.

The nature of the feminine is to go inwards and into the mental world. The characteristic emotion of femininity, then, is fear, and this manifests as emotional violence, which very few recognise as bad.

This emotional abuse takes different forms to physical abuse. The emotional abuser prefers to lay a guilt or shame trip on their victim, coercing them into the desired behaviour by stoking fears of social rejection. The abuser will detail disappointment, shame or embarrassment that they attribute not to their desire to control, but on the actions of their victim.

Another source of emotional violence is dishonesty. After all, to lie to someone is to do them a psychological violence (this is routinely denied by the liars themselves).

The major source of dishonesty in the world is politics, or, more precisely, the desire of certain humans to remake the entire world in their own image (which is all politics is). Because this desire naturally brings egotistical people into direct conflict with others who want to remake the world in their image, a lot of lying about it has sprung up.

For example, the feminazis who shriek about things like toxic masculinity will never admit that they are doing so for political reasons. In particular, they are trying to shift the balance of the culture towards the feminine, for the sake of their own gratification, not that of the wider society.

Claiming that being “opposed to emotional sensitivity” is necessarily “toxic” is a value judgment, not a scientific description of reality. It is a political statement, not a psychological or sociological one.

It is not a coincidence that being emotionally sensitive will also leave a person more vulnerable to strategies of emotional coercion and abuse.

This tendency to conflate emotional stability with patriarchal oppressive male domination brings us close to a definition of toxic femininity.

Some have described the pattern of toxic femininity, perhaps without being aware that they had done so, as “feels over reals”. Extrapolating this with what we know about the association between femininity and dishonesty, we can define toxic femininity thusly:

“A specific model of womanhood, geared towards dominance and control. It’s a womanhood that views men and boys as inferior, sees conversation not as an act not of affection but domination, and which valorises emotional violence as the way to set the world to order.”

In other words, females are equally capable of being toxic as males, and for the same reasons. The only difference is that females tend to use indirect methods.

As described above, toxic females are more than happy to use emotional abuse as a method to impose control and to remake the world in their image.

Their conceit is that this emotional abuse is either 1) not really abuse because it is non-physical, or, 2) causes categorically less suffering than the physical abuse preferred by males and is therefore categorically less blameworthy.

As any reasonable person will have concluded by now, this is utter bullshit.

Leaving aside the politics and related bullshit for a second, it’s possible that the concepts of toxic personality types have some use.

The important thing is to first and foremost learn to identify toxic individuals, because toxic individuals are capable of expressing their nature in either masculine or feminine ways, regardless of whether that person is male or female.

An understanding of toxic femininity might make this easier to do, because if only masculine behaviours are considered toxic a person leaves themselves wide open to abuse by feminine methods.