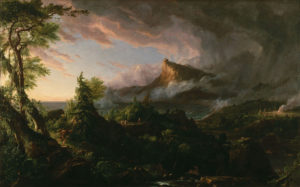 As any long-term reader of this magazine can recite by heart: as below, so above. The life-cycles of men and women are well known; those of empires somewhat less so. This essay will examine how the life cycle of Internet forums follows a pattern similar to what can already be observed in Nature.

If one follows the series of 19th century Thomas Cole paintings known as The Course of Empire, one can surmise that, on a much smaller scale, Internet forums follow the same pattern.

The first stage is known as The Savage State. With regard to empires this refers to the state of nature that existed before human civilisation arose. It is therefore an especially feminine time, full of raw potential and untrammelled chaos.

Internet forums begin in a similar state before anyone starts regularly posting. Often there is nothing but forum software to start the process. At this stage the forum has the full potential to go in many directions, as the people running it are yet to make any firm decisions regarding subforums or posting etiquette.

The second stage of an empire is known as the The Arcadian State. This is functionally almost identical to a world run by philosopher-kings. In the Arcadian state, humanity lives at peace with Nature. We might have learned to alter our environment in order to not die as easily, but nothing major has happened.

An Arcadian state exists in Internet forums when the people who have the greatest personal interest in the subject matter naturally find the forum and start to populate it with quality threads. This usually occurs when the name of the forum is spread around by whoever started it and they attract a small, hard-core of highly interested experts.

The third stage of empire is known as The Consummation of Empire. This is represented by glorious buildings at noon on a summer’s day. Everywhere there are marble steps; one can observe a triumphant general crossing the bridge that spans the central river, and all of this in the shadow of the great domed temple.

This is also the best stage of an Internet forum. In this third stage, the excellence established in the second has attracted a huge number of other people. They all want to take part in the glory, and so they flood in and tell their friends. The forum expands, and develops. More rules become necessary to deal with the friction naturally caused by such heavy interaction.

However, in the same way that the seed of decadence present at the height of the glory of empire is also the seed of its destruction, so are the abundance of rules and restrictions that come with the greatest extent of traffic the downfall of Internet forums.

The fourth stage of empire is known as Destruction. In this stage, the empire is collapsing. The painting represents the fall of the Roman Empire as it was sacked by Vandals and Goths, but it could serve as metaphor for the fall of any empire into destruction and ruin. It is hinted that the cause of the destruction may have been a civil war.

Again, the pattern is replicated perfectly in the life of Internet forums. The barbarian invaders are the people who recently joined the forum at its height but who would clearly have not have belonged back in the Arcadian stage. In other words, plebs.

These plebs have the effect of dragging the forum back down, firstly by reducing how willing other posters are to be open and creative, and secondly by provoking whoever is running the forum to bring in more and more rules to crack down on the plebs and to try and restore the glory days.

In this fourth stage of forums, it becomes harder and harder to post anything unorthodox or interesting as true creativity becomes ever more likely to fall foul of censure. Consequently, many of the threads, instead of discussing current events like in the glory times, are just wistful ramblings about old posters and old arguments.

New posters, instead of finding a niche they can feel happy in, are persecuted by older ones, frequently in the manner of high school girls psychologically abusing a victim. This henpecking has the effect of making the forum into a troll’s paradise, which attracts an ever nastier grade of poster, until the stream of new blood dries up completely.

The fifth stage of empire is known as Desolation. This is similar to the first stage, with the exception that the potential of nature, instead of bursting forth with vitality, is exhausted. There are no more human beings – Nature has entirely reclaimed the space on which a glorious capital once stood; weeds and flowers grow from the cracks in the shattered marble.

This is also the natural end stage of all Internet forums. Indeed, 99.9999% of them are already at this stage. Here, there are no more truly human posters, just ghosts of people who used to be funny, back when they were younger and cooler, and before they sold out for a job or became bitter because of a family or or extended period of time without getting laid.

In this stage, there are as many banned users are there are regular ones. Here, no new posters even want to join the forum, because there is no joy in listening to middle-aged washouts droning out about how everything was cooler a decade or more ago. Especially not when these same washouts feel obliged to pack bully anyone who threatens the morgue-like atmosphere.

Because computer software does not need to eat and is therefore cheap to maintain, some forums are capable of lurching along in zombie mode for many years.

And History, with all her volumes vast,
Hath but one page…