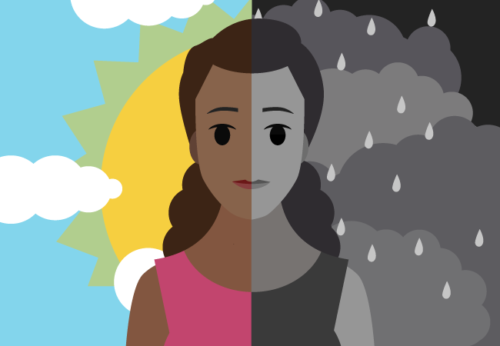 Bipolar Disorder is an extremely taxing mental disorder that is believed to affect about 1% of the population at any given time. Most commonly affecting people in their mid to late 20s, the condition affects men and women in roughly equal numbers. This article looks at how to write believable and realistic characters with Bipolar Disorder.

As the name suggests, bipolar disorder refers to two distinct poles, one corresponding to ‘up’, the other ‘down’. These relate to mood and behaviour; Bipolar Disorder was once known as “manic depression”. The stereotypical course of Bipolar Disorder is for someone to feel extremely low and depressed, and then suddenly feel high-energy and manic, only to fall back into depression, in a cycle that never ends (important to note here that the cycle is not predictable, like a pendulum, but chaotic).

Although the idea of mania can sound appealing to those with no experience of the condition, and although it is generally much less unpleasant than depression, Bipolar Disorder causes problems at either pole. It contrasts with healthy, natural changes in mood in the sense that people with the condition are seldom in an average, moderate state inbetween the two poles, as mentally healthy people are.

When a person in this condition is in a depressed phase, they are at risk for all of the suicidal behaviours that accompany Major Depressive Disorder. Self-harm is common among people with Bipolar Disorder, a function of the deep self-hatred that occurs in depressive phases. However, when a person is in a manic phase, they are also at risk of harming themselves.

Manic periods have to last for at least a week to really count, as an elevated mood could occur for any number of reasons. The manic phase of Bipolar Disorder can, at its most extreme, present much like a methamphetamine bender. A character undergoing one will tend to talk fast, sometimes stammering, and will have difficulty following a conversation, being easily distracted. Also like a methamphetamine bender, manic episodes tend to result in very little sleep. At worst, they can cause a person to become psychotic.

The combination of these factors can result in some extremely risky behaviour, which could be dynamite for your creative fiction. Hypersexuality, gambling, drug-taking and speeding in motor vehicles are all common behaviours for a person with Bipolar Disorder while they are in their manic phase. Someone behaving like this might seem like they’ve been given a week to live and want to make the most of it.

A character with Bipolar Disorder might not be easy for other characters to deal with. The erratic moods of bipolar sufferers means that other characters seldom feel comfortable around them. People with bipolar can be unpredictable. They are also very high suicide risks, because of the combination of impulsiveness arising from the mania and the self-hatred arising from the depression.

Sometimes a character with Bipolar Disorder will come across as full of energy and life and enthusiasm, making them seem very charismatic to another character. Other times they were be low in energy and miserable, which makes them seem very different. Someone who meets a Bipolar character while they are at one pole, and then meets them again while they are at the other, might have difficulty believing they’re the same person.

If the protagonist of your story has Bipolar Disorder, they might find themselves facing a considerable degree of social stigma. As mentioned above, their condition might make other characters feel uncomfortable. The protagonist might find themselves getting overlooked for parties and for social occasions on account of that other characters are afraid they will be in too crazy of a mood.

If the protagonist encounters another character with Bipolar Disorder, things might not be much easier. It’s common to meet a person with Bipolar Disorder during one of their manic phases, because this tends to cause them to become more extraverted. During this time, they might strike others as dynamic, engaging and enthusiastic. However, if a friendship is formed, it may not survive the depressive phase.

There are two kinds of Bipolar Disorder, known as Bipolar I and Bipolar II. The essential difference lies in the severity of the manic symptoms. The more powerful the manic symptoms, the more likely the sufferer will get a diagnosis of Bipolar I. This is not to downplay the difficulty of living with Bipolar II, but some of the hypomanic episodes in the latter case can actually be useful for getting things done.

Bipolar Disorder is distinct from Borderline Personality Disorder, although the behaviour of people with the condition can appear similar. For instance, people with either condition are capable of changing their attitude towards another person very quickly, but the Bipolar sufferer tends to have more self-awareness than the Borderline and maybe aware that their change in perception is not fully rational.