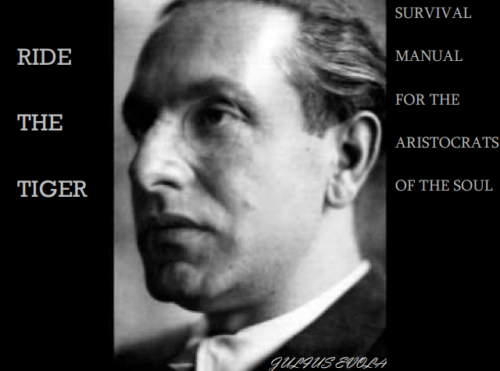 This reading continues on from here.

The 22nd essay in Ride The Tiger is called ‘Dissolution of Modern Art’. Much like everything else, Evola contends that art has also degenerated. In the case of art, it has degenerated into a feminine subjectivity that is too afraid to say anything. Now we can no longer even speak of traditional art because no-one has any idea what that even is.

In this essay Evola echoes Plato’s description of the degeneration of political forms, only applied to the world of art. Modern art would be best served by achieving maximum craptitude, because that would provide the clean spiritual slate upon which something authentic could be written. Literature is also criticised as “fetishising” human relationships and merely documenting them with full banality.

As in many previous essays, Evola concludes that art has been given too great an importance, to the detrimental of the spiritual. What gives meaning to life can exist “even in the virtual absence of art”. Art has, in reality, undermined idealism, especially in the modern world. Positive realism lies in the assertion of values such as truth and spiritual courage. That which truly has value needs no consensus to agree.

The 23rd essay is ‘Modern Music and Jazz’. Evola has a keen interest in music and understands its development over the course of recent centuries. Perhaps weirdly, Evola writes here about the “preponderance of dance music over vocal and emotional music” – a sentiment shared by many today. He considers that the drift towards nihilism in philosophy and art has been echoed by one in music.

Music has, according to Evola, developed in ways that mirror the development of all other social movements. Therefore, the advent of jazz is no surprise – it is merely the democratisation of music, something “primitively ecstatic”. This doesn’t mean that jazz is crude, though, or that jazz players are unskilled musicians. It simply heralds the return to the world of fundamental, elemental forces.

This “Negro music” is associated with “dark forms of ecstasy” in Evola’s reckoning. He compares the feelings that arise from dancing to rhythmic music to the frenzies of the dervishes: “possessions of savage ritual”. Despite frequently being paired with drugs, these occasions cannot be compared to the ancient rites of Dionysus etc. because there is nothing sacred about them – they are mere escapism.

On the subject of drugs, the 24th essay is ‘Excursus on Drugs’. Evola considers drugs to “most visibly have the goal of an ecstatic escape”. Some of the people who choose such an escape are those who have perceived the meaninglessness of human existence. Others are “neurotics and psychopaths”. Part of the danger of drugs is, like rhythmic music, they can be used to open up awareness to a suprasensible world, such as in initiatory ritual.

Despite this caution, Evola gives due credit to the use of various drugs in sacred ritual. The Taoists considered even the use of alcohol to have a kind of magical effect, and he mentions the Central American shamanic traditions that made much use of mescaline, peyote and psilocybin mushrooms. However, he also points out that no-one really understands how to use these sacraments anymore, because no-one is capable of the necessary spiritual preparation. This leads to the risk of “possession by dark powers”.

If used correctly, nonprofanely, drugs offer the possibility of coming into contract with a superior dimension of reality. Stimulants and depressants can more or less be ignored for these purposes. Hallucinogens are excellent but have many drawbacks; their ancient use involved guiding the trip with symbols and a preliminary catharsis of emotion, two things that are seldom done today. Narcotics can be useful for the sake of dissociating from the mundane but the experience is hard to control.