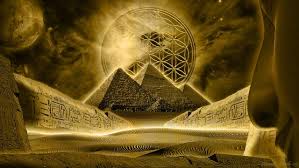 In terms of elementalism, it can be said that clay represents health, iron represents courage, silver represents intelligence and gold represents spirituality. But why should spirituality be equated with gold in particular? This essay examines the question.

Gold is the cornerstone of the economy, because it’s ultimately what backs debt (even if that’s no longer as apparent as it was when we were on the gold standard). Everyone knows, intuitively or otherwise, that other people will always accept gold as payment for goods and services, and therefore that the substance always has value. This means that material things can be valued in terms of gold.

In alchemism, gold represents spirituality, for the reason that spiritual treasures are the most valuable of all. The universal appeal of gold is similar to the universal appeal of a genuine connection with God. Much as the value of gold is obvious to anyone who can sense it in the material plane, so is the possession of metaphysical gold obvious to those tuned into it.

Gold is the rarest in physical terms, and its the hardest to create in alchemical terms. Like genuine spiritual wisdom, there simply isn’t very much of it. Although clay is everywhere and iron can easily be found, silver and gold require more effort, and gold twenty times more so than silver.

The intellectual traditions that give value to silver might be hard-won, but it’s possible to develop them in a formulaic manner through the education system. There is no such thing as formulaic development of spirituality. Every consciousness takes its own path back to God.

This reasoning causes them to think more short-term. After all, if long-term thinking means having to face up to fact that one will die, it’s best to avoid it entirely. Best just to live for immediate gratification, and the less guilt the better.

This has repercussions, many of which are denied by the men of silver and iron. The men of silver delude themselves into thinking that the spiritual side of life is childish nonsense, in contrast to the hard, adult sobriety of their scientific materialism. The men of iron, for their part, consider gold to be soft and therefore a weak element, not particularly more valuable than clay on account of its lack of immediate application to warfare.

Both are grievously wrong, and wrong in a way that causes immense suffering. The men of silver find that, no matter how many books they read, they cannot solve existential questions without an understanding of the true nature of God. Absent this, the pin is pulled from history and it no longer has any meaning. The men of iron don’t even know what they’re missing out on.

Another way in which gold represents spirituality is that it cannot degrade. Clay can rot, iron can rust and silver can tarnish – but there is no such equivalent for gold. One can leave a gold coin out in the elements for ten years and it will be as shiny as the day one left it there. Like spirituality, gold is not temporal in this sense.

Metaphysical gold works in a similar fashion. The health and strength of every person fades early in their life, and their mental powers fade late, but all of these temporal powers must fade. Spirituality relates to that which endures beyond the death of the physical body, and value earned early in life tends to endure.

A final way is that gold is extremely malleable: one gram of it can be hammered out into a sheet one square metre in area.

Spirituality, too, is extremely malleable. It is useful everywhere. Whereas big muscles are seldom useful and big brains are only useful where there is information to be processed, an appreciation of the fact that this is it will pay off in all domains of life.