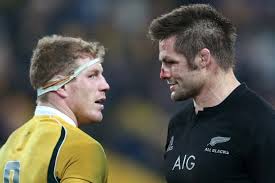 The Sydney Bledisloe Cup match of 2000 was a high water mark in international rugby. In front of 109,000 people, the world champion Australia team and the desperate, wounded All Blacks fought to the death like Ali and Frazier. Many who saw it said at the time it was the most extraordinary rugby match ever played, with an iconic match-winning performance from none other than Jonah Lomu.

The All Blacks prevailed on that night, 39-35, but the Wallabies would win by one point three weeks later to retain the Bledisloe Cup, and at the time it seemed like the advent of professional rugby was about to make for a titanic era of contests for this trophy.

Professional rugby seemed like it was going to bring a lot of razzamatazz to the Southern Hemisphere circuit – Super Rugby was also huge that year. The ACT Brumbies topped the table at the end of the pool stages, and ended up losing the final at home against the Canterbury Crusaders by one point.

The next year, 2001, marked the Super Rugby debut, also for the Crusaders, of one Richie Hugh McCaw. As it turned out, McCaw was not so much a rugby player as a genius that played rugby.

He only played eight minutes of Super Rugby that year, but he did play a full NPC season, and was good enough to win selection to the All Blacks’ end of year tour, where he was handed a debut against Ireland, and promptly won Man of the Match.

The next year, 2002, McCaw became a Crusaders regular. In an odd echo of the future, the Crusaders won every single match that year, taking the Super Rugby title undefeated – something never achieved before or since.

2003 might have been the end of the golden summer for Australian rugby. They lost the Bledisloe Cup, but managed to knock the All Blacks out of the World Cup, going on to take an all-conquering England team to extra time in the final.

Come 2017, and Australia has not won the Bledisloe Cup since. Richie McCaw may have retired two years ago, but in the same way that Mansa Musa’s pilgrimage to Mecca depressed the price of gold in the Middle East for decades afterwards, McCaw’s decade of almost total dominance still depresses Australian rugby.

New Zealand rugby is so dominant that the 4th-ranked Kiwi team, the Highlanders, has only lost three games all season. Despite this, they can’t climb any higher than 4th because the Hurricanes have only lost two, the Chiefs one and the Crusaders zero.

Even worse is the effect this dominance has had on the Internet rhetoric. At the turn of the century, trans-Tasman rugby banter was between equals. In recent years, however, it has taken a darker turn: the prison rape metaphor, once only applied to descriptions of All Blacks matches against the hapless Celts, crept into summaries of Bledisloe matches.

At its nadir, the Internet rhetoric was entirely based on the degree of sexual impotence the Australian players and fans would suffer as a consequence of the losses and for how many years afterwards. The jokes were that the children of Australian players would be too ashamed to admit their paternity to their classmates.

So the question is this: was Richie McCaw so good at rugby that he actually destroyed the international game? Did he set standards so high that all other nations just gave up on hoping to ever match them?

Probably not. After all, Australia made it to the World Cup final in 2015, and they did about as well there as any other side could have hoped to have done – namely, a loss by a two-try margin.

Alexander the Great died at age 33, and within months of the same age Richie McCaw retired from international rugby. The struggle for a successor to Alexander saw his empire shatter into four pieces and then to further disintegrate.

Kieran Read now leads the All Blacks, and his side might play the role of the Seleucid Empire, the early favourites to recreate the total world domination that McCaw once achieved.

However, no order can exist indefinitely, and it is in the nature of peaks to erode into valleys. The standards set by McCaw are unlikely to be maintained for the simple reason that the men tasked with doing so will not possess McCaw’s genius.

This column believes that it is in the Australian nature, despite a decade of denial, to recognise the smell of blood at the first opportunity and to take advantage of it. Therefore, it predicts that the current sorry state of Australian rugby will not last for much longer.

And as long as one side can stand up to the All Blacks the others will always believe themselves to have a hope.