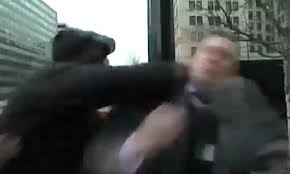 At a march in Washington D.C. this week, accused neo-Nazi Richard Spencer was kinghit from the blindside by a mystery black-hoodie-clad protester. Footage of the incident was the most viral meme of the entire Inauguration period, trumping even anything the U.S. President said. The reaction of the Internet, predictably, was divided.

One part of the viewership was appalled by the purposeless attack on the sacred value of free speech; another part was excited to an almost sexual state of arousal by the sight of a Nazi getting what they thought he deserved.

Justification for the latter reaction began almost immediately, and was earnest, although convoluted. The basic premise, however, was eerily familiar: Spencer was a Nazi, Nazis want to violently take over the world, therefore they can essentially be attacked at any time in pre-emptive self-defence.

On the face of it, it’s hard to argue with that line of reasoning. The excuse that “I just got the bear before the bear got me” was after all, the excuse George W. Bush used to invade Iraq and kill a million people – and he completely got away with it.

There’s one glaring problem with the Bush Doctrine though, especially when it is applied to blindsiding people in the street for their political opinions: the potential excuses that a person might make to conduct ‘pre-emptive’ violence against another is limited only by human ingenuity.

It would then be legitimate to beat the shit out of any Christian or Jew one met on the grounds that their holy book contains a command from God to kill homosexuals. One could also conduct pre-emptive violence for a number of reasons against any Muslim you met.

Any American could be dealt to under the logic that American imperialism is one of the prime threats to the stability of the world order, and any European could be shown some fist on the grounds that prior imperialism suggests a high likelihood of future imperialism. Any Chinese or Indian could be bashed because their massive populations threaten the viability of the biosphere.

If someone calls you a Nazi, whether you are one or not, that could be an excuse for pre-emptive violence on the grounds that the epithet is generally only levelled at people who are murderous totalitarians and therefore should be killed with extreme prejudice. And people are being called ‘Nazi’ at ever-increasing rates – it’s almost become synonymous with ‘to the right of the speaker.’

If someone calls you a Commie, whether you are one or not, that could be an excuse for pre-emptive violence on the grounds that the epithet is generally only levelled at people who are murderous totalitarians and therefore should be killed with extreme prejudice. And people are being called ‘Commie’ at ever-increasing rates – it’s almost become synonymous with ‘to the left of the speaker.’

This means that anyone can find a reason to attack anyone else pre-emptively. It’s just a simple matter of knowing if you are doing it because your target is a Nazi or because they are a Commie.

As anyone who walked the streets of Weimar Germany could tell you, National Socialists and Communists are just ready made for fighting, like the yang and yin of violence. Their natural instinct is to go each other like two stags in rutting season.

Perhaps the best course of action for reasonable people is the Churchill Doctrine that served Britain so well in World War II: just stand back and let them kill each other.

P.S. Our anarcho-homicidalist readers usually enjoy seeing any kind of political extremist get punched in the head, so here’s the funniest dubstep remix of the incident we could find.