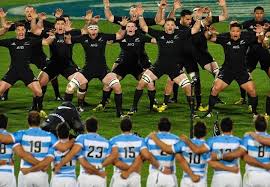 As most people are aware, the All Blacks have two hakas: the traditional Ka Mate, composed by Te Rauparaha around 1820, and the modern Kapa O Pango, composed this century. A smaller number know that Te Rauparaha was some kind of warlord and that Kapa O Pango came in during Tana Umaga’s time as All Black captain.

Te Rauparaha was indeed a war hero – to some. To others, he was every bit the war criminal as other war leaders tend to be viewed as by the people they attacked. He played a leading role in the Musket Wars as a war chief of the Ngati Toa. Armed with musketry, Te Rauparaha’s forces swept all the way down to Kaiapoi, and along the way he carried out some of the most ruthless genocides ever seen in Polynesia.

As this article luridly describes, the existing residents of the South Island were exterminated in a campaign of brutality that would have appalled even the men who destroyed the Aztec Empire under Cortez. Mass murder followed by cannibalism and enslavement of any survivors was the standard practice of war parties in the New Zealand of the 1820s, and the forces under Te Rauparaha were not an exception.

By the early 1840s, the Northern South Island was almost completely depopulated, which made it ripe for European settlement. Nelson and Blenheim were early growth centres on account of this; the road between them, where the Maungatapu Murders took place, was once a relatively busy highway, even if it could only be traversed by horse and cart or by foot.

This is the reason why Nelson has the honour of many national firsts – such as the the location of the first rugby match ever played in New Zealand, an 18-a-side affair at the Botanical Gardens, near the Centre of New Zealand.

So to say that Te Rauparaha is not well thought of by the Maori tribes local to the Northern South Island, or what’s left of them, is an understatement, akin to saying that Adolf Hitler is not well thought of among Poles. For the All Blacks to perform a haka written by him, on the same grounds where he committed possibly the worst atrocities New Zealand has ever seen, would be too great an insult for the local Maori to bear.

Steve Hansen and Kieran Read, ever the master strategists and culturally acute on account of being in charge of New Zealand’s single most successful example of intercultural co-operation, are entirely aware of this, and will no doubt avoid performing the haka that has particular sinister connotations to the local Maoris of Nelson. No surprises: we will see Kapa O Pango this weekend.