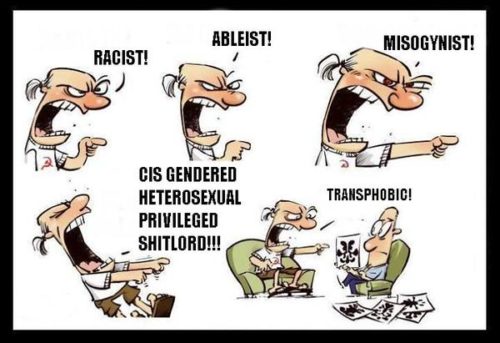 Totalitarianism is defined by a striving to regulate every aspect of both public and private life wherever possible. It’s the antithesis of freedom. Benito Mussolini, one of history’s most infamous totalitarians, declared that even the spiritual life of the citizenry is to be controlled to the finest detail.

According to Hannah Arendt, the appeal of totalitarianism lies in its ideology, which, like religions, provide “a comforting, single answer to the mysteries of the past, present, and future.”

The essential point that distinguishes these ideologies from free thought is that an ideology offers an easy, pre-packaged answer to any question that might arise. Because of this it is never necessary to actually think about anything, much less discuss anything with another person – all answers derive directly from reference to the ideology.

Social Justice Warrior culture is a form of Communism, in that it is explicitly horizontalist. Like all other horizontalist ideologies, anyone who distinguishes themselves, for any reason, is assumed to have done so by immoral means. The logic behind this lies in the ideological assumption that all are equal.

Because the belief in the equality of all people is fundamental to SJW culture, a natural corollary is that anyone who has achieved an outcome that elevates them above the masses must have necessarily done so by immoral means.

And so, the higher standard of living in the West, when compared to the Middle East and Africa, cannot be explained outside of the template of colonial oppression. All Western wealth is considered stolen; a crime that needs to be redressed by horizontalist action.

There is no room in Social Justice Warrior culture for anyone to put effort into bettering themselves – everything that betters a person is considered to be the result of unfair privilege. As this column has previously pointed out, this ideology is what Nietzsche would have called a slave morality, in that it is fundamentally based in resentment and a desire to rip everyone down to the lowest level.

Where this ideology really goes wrong – and where it is in danger of becoming a totalitarianism akin to Nazism and Communism – is its utter failure to accept that certain mentalities and cultures create poverty among their victims of their own accord.

And so, the sorry state of the Middle East cannot be explained by the legendary unwillingness of Middle Easterners to live in peace, and neither can it be explained by the extremely high rates of religious fundamentalism, nor the appalling human rights record of their rulers, nor the cultural indifference to education and free thought, nor the widespread practice of infant genital mutilation.

It’s all the fault of colonialism, or America bombing them.

All of this would be just another half-arsed theory were it not for the demonstrated ability and willingness of this ideology to destroy the lives of anyone who opposes it. The most striking recent example was the sacking of a Google employee for questioning the social engineering practices of his company. James Demore wrote a manifesto that made the assumption that biology trumps SJW ideology, and this was decreed to be wrongthink punishable by the destruction of his career.

Believing that biology is real is a thoughtcrime when it is considered to advance “harmful gender stereotypes in our workplace” – in other words, biology is what we tell you it is, and any disagreement is grounds for retaliation.

The firing of one engineer is not comparable to the historical crimes of 20th century totalitarian states, true, but this example shows how far SJWs will go to deny reality where it conflicts with their ideology, and this bodes poorly for a peaceful 21st century.

This social engineering was, and continues to be, forced on Westerners by people who have adopted SJW ideology. If it leads to a civil war in Europe, then this ideology will be justifiably ranked alongside Nazism and Communism as one of humanity’s greatest mistakes.