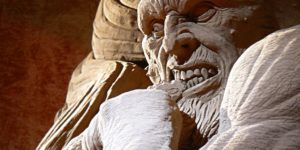 The four books of the Satanic Bible are named after four faces of the adversary, and the four that most readers would have a surface familiarity with. The Satanic Bible briefly draws a parallel with these names and with the four basic alchemical elements. This essay discusses that parallel at length.

This line of reasoning obviously gives a lot of power to the priesthood, which is why that profession has been instrumental in rotting the brains of the rest of us for thousands of years.

Anyone rejecting that line of reasoning is necessarily a devil in the eyes of the priesthood and those they have hypnotised into doing their bidding. In cultures where the priesthood is dominant, they are able to criminalise opposition to their lies, as with blasphemy laws, mandatory dress laws for women and drug control laws.

The obscene degree of subservience demanded by the priesthood before they will cease their aggression against the populace causes many, many people to start to feel loyalty to the adversary. If God demands the genital mutilation of infant children and the total submission of women, then any person who has not been bred for slavery from birth will naturally oppose God.

Understandably, such a fundamental archetype as he who opposes God will manifest, in the Great Fractal, as a wide range of various beings, depending on the cultural context of whoever views him and their state of mind and individual frequency.

The first book of the Satanic Bible – the Infernal Diatribe or the Book of Satan – is linked to fire. This is perhaps because fire is the most rebellious of all elements.

Like fire, Satan is seen by the Abrahamists as an exceptionally destructive force, because the world as created by their God was naturally perfect and so Satan, who wished to change it, naturally wished to destroy perfection.

This also explains why Satan is always at, or near, the top of the pantheon of those who identify with the adversary. After all, when the Biblical Satan was commanded by God to prostrate himself before Adam, Satan responded: “I am better than him. You created me from fire and created him from clay.”

The destructive effect of fire is not seen by Satanists as a thing that destroys the correct order of God. Generally it, and Satan, represent a liberating force that dissolves acid-like the foundations of corruption in the world.

The second book of the Satanic Bible is the book of Lucifer, which is associated with the sign of air. Lucifer is the Latin word for light-bearer, and so he also bears similarities with figures such as Prometheus, Mercury, Maui and even Jesus Christ.

Fittingly, the literary style of this book strikes a change from the fiery diatribe of the first. Instead of poetry it is comprised of intellectual essays, which are Luciferian in the sense that their iconoclastic style tear away the webs of lies that blind us and let the light of truth in.

Rather, Lucifer represents the philosopher and the scientist, both of whom have had to fight for the right to tell the truth in the face of Abrahamist dogma.

Of course, that doesn’t matter for the Abrahamists. If the only acceptable moral position is complete and total submission to the every word of the priests, then so much as thinking for oneself is a sin, because it opens the door to possible subversion of the will of God.

The third book of the Satanic Bible is the book of Belial, otherwise known as Beliar by some in the Abrahamic tradition. The etymology of the world relates to “lacking value”. This is because the statements of Belial have no truth value – he is the father of lies.

It was said of Belial in Paradise Lost that “all was false and hollow” and that he “could make the worse appear / The better reason” – in other words, he told believable lies.

Naturally, if one is a liar oneself, and the objective is to bullshit the population into submission to your chosen God, then anyone telling the truth about you or your bullshit will have to be branded a liar for you to survive.

In this way Belial represents the adversary as scapegoat. If the population have been lied to so badly that they have become confused, then anyone who speaks the truth will appear to be speaking lies, and naturally because those lies are actually true they are also believable.

What are “believable lies” to the Abrahamist are often the stone-cold truth to the freethinker. In this sense Belial represents the courage to always speak the truth regardless of the social pressure that might be exerted in the other direction.

Belial is related to the element of Earth in the Satanic Bible, and he plays this role by way of being stable. As everything that lives rises from the Earth and falls back to the Earth, so is the truth about reality more fundamental than any lies told about it.

Who the Abrahamist calls Belial is he who brings people back down to Earth and to reality after they have been swept away by the lies, promises and threats of Abrahamism.

The fourth book of the Satanic Bible is the book of Leviathan. This is the face of the adversary when seen through the aspect of water. In this manner, water represents the emotions, which flow back and forth throughout the world, giving life where things had been too dry.

There is a strong ascetic streak to much of Abrahamism, especially in regards to sex. This asceticism is shared, not only by other religious traditions (in particular Buddhism), but also in regards to other avenues of worldly enjoyment, such as dancing, music, gambling and the interaction of unmarried men and women.

You name it, Abrahamists have tried to ban it – and the more enjoyable it was, the harder they tried. Even now, with all of dancing, music, prostitution and homosexuality legal, they continue to insist that the laws putting people in cages for cannabis offences are upheld for spurious reasons like protecting the mental health of the young.

There is a particular reason for this, and like most religious “culture” it has a superstitious origin. The essential delusion is that anything that feels good will cause a person to identify with the material world, and this – because the spiritual and material worlds are believed to be in constant opposition instead of harmony – will then make them become less spiritual and more like a vicious animal.

The reality that suffering causes a greater attachment to the material world than pleasure, because suffering when present is always at the forefront of the mind of the sufferer whereas pleasure is fleeting, is entirely lost on the followers of slave religions.

In this manner, Leviathan represents an entity like Dionysus, Pan, Mercury or Loki. You can thank Leviathan for every delicious recipe ever remembered, every lovemaking technique ever passed on, every joke worth repeating and every joyful ditty ever learned by heart.

One could say that there were as many faces of the devil as there are people who oppose their local conception of what God is. And in the right time and place that could be any of us.