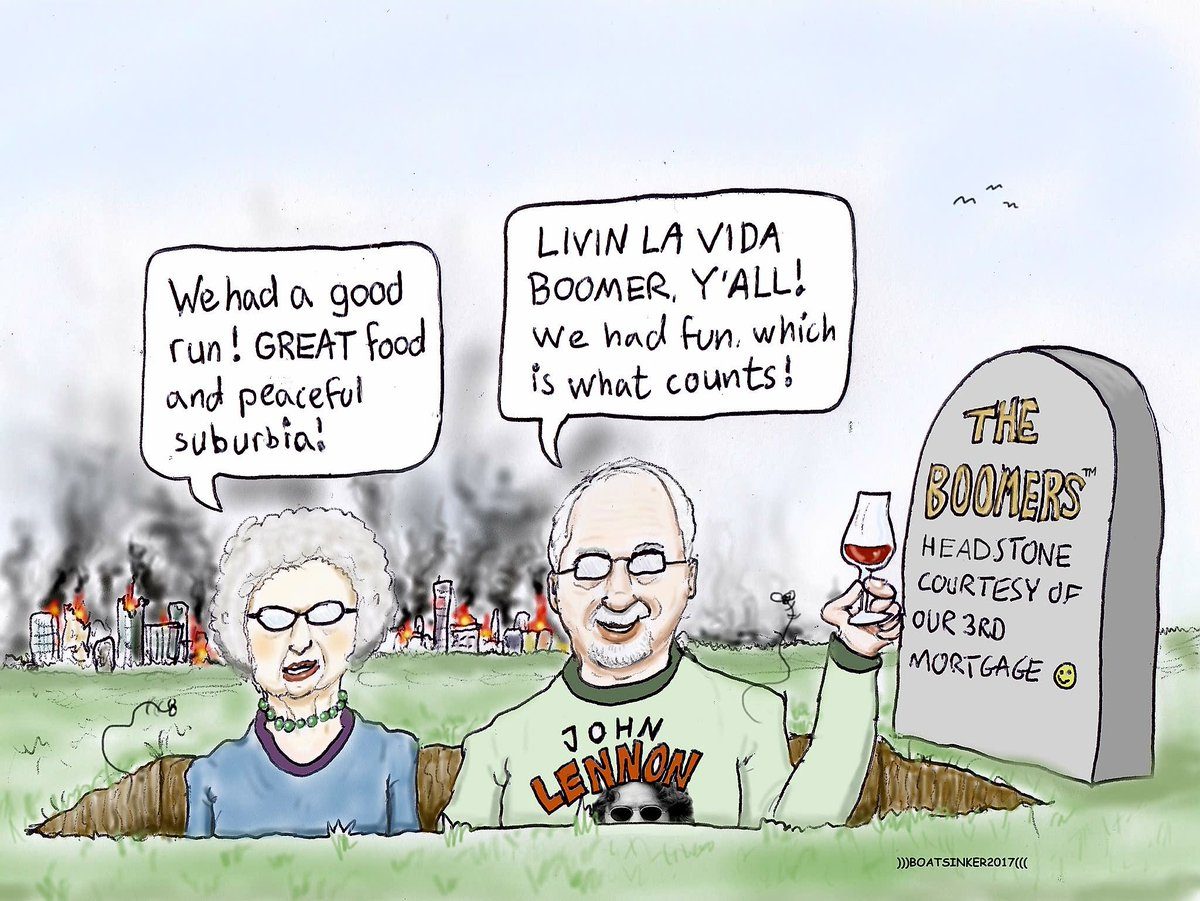 The Boomer is an utterly Godless creature. Having completely forsaken divine guidance and surrendered to ego, it lives a life of pure narcissism, driven only by instinct, lurching from one impulse-fuelled drama to the next. However, there is always a resurgent spark of yang everytime yin appears triumphant. When the last Boomer perishes, God will return to Earth.

The Boomers are a deeply damaged generation, in two major ways.

Men who spend several years in mortal combat, as the parents of the Boomers did, almost inevitably end up with warped attitudes to violence, abuse and mental health. This isn’t to blame that generation – this is simply pointing out a psychological fact by way of explanation. When you add large amounts of alcohol to this mix, in lieu of an actual mental health system, you end up with a parenting style that doesn’t lead to healthy offspring.

Many returning veterans became alcoholics to deal with the trauma of surviving combat and the deprivations of war. Many others became emotionally distant. A great number found that a screaming child brought them straight back to the screams of the wounded on the battlefield, and this brought with it bursts of adrenaline – hardly the right mindset to be raising children with.

For Boomer children, it was common to only see one’s father when completely pissed after work. When they did interact with fathers, it was often with damaged, broken men who behaved unpredictably. Coming to one’s parent with a problem was often met with a “Fucking harden up!”, and causing problems frequently led to the bash. What the Boomers learned from this was to put themselves first, always, because the world was a terrible and dangerous place.

However, World Wars One and Two did a lot more damage than merely causing Post-Traumatic Stress Disorder to millions of veterans who would then go on to neglect and abuse their children. It also demolished their belief in God.

In the lead up to, and during, World War One, people on all sides were told that their nation’s participation in the war was the Will of God, and that God wanted them to go and fight in Europe. This severely weakened the belief that most Westerners had in God. World War Two destroyed it. By the end of World War Two it was widely believed that the very idea of God was for weaklings, and was just a trick to sucker people into doing the priest’s bidding.

Consequently, the Boomers were raised in an unprecedented absence of spirituality and spiritual sentiment.

This combination of self-centredness and godlessness led to a narcissism that had never previously been seen. This monstrous egotism has pushed the world into an extremely precarious state, with numerous dangers that pose existential risks to the human species. Not only is the environmental and military situation precarious, but the ideological climate is conducive to fanaticism.

Generation X is aware that the selfishness of the Boomers is far from normal. We’ve seen our grandparents’ generation, who were entirely different. Despite the hardships they themselves had endured, they were kind, thoughtful, other-focused: the anti-Boomers. Some of us can even remember our grandparents saying that there was something wrong with the whole Boomer generation, that they must have been spoiled or left in front of the television too long.

Generation X, as described in Fight Club, has faced a different dilemma. With a parental generation so self-centred as to be all but absent, and a grandparental generation mostly shuffled off this plane of existence, our Great War is a spiritual war. We have problems such as finding gratitude for what we have when we know that our parents had it so much better. We must look for meaning in a dying culture.

Many people like to act as if God was an unnecessary thing altogether, and that an absence of belief in God had no meaningful effect on a person’s behaviour. The reality is that, absent a belief in God, an individual will inevitably behave as if they were an animal, driven only by biological concerns for resource acquisition, social dominance, shitting, pissing and sex. This causes tremendous suffering to all.

The first Boomers were born in the mid-40s, and the last ones in the early 1960s. This means that the oldest Boomers are already in their mid-70s, and that means that they’re about to start dying off in droves. Right now, Boomers are in complete control of the political, economic and cultural agenda, but their impending mass retirement means that they will cede all of this to their offspring over the next fifteen years.

The death of the last Boomer will be as the bursting of a great dam, one that held back the flood of a new spiritual age. With no more Boomers to trash the planet in search of an ever-comfier retirement, Generation X and the Millennials will be able to build a world that focused on the cessation of suffering. This we shall achieve through a great spiritual renaissance.