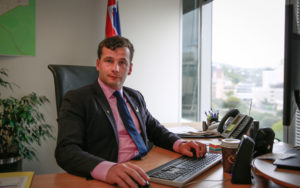 This tells us that the average ACT voter is not as wealthy as the average National voter, despite the reputation of the ACT Party as the party of millionaires only. Where ACT manages to cleave off votes from National appears to be by targeting the specially ambitious, the specially driven, and those with a specially low level of solidarity with other Kiwis.

The two occupations that correlated significantly with voting for ACT in 2014 were professionals (0.39) and sales workers (0.27). Perhaps surprisingly, there was no significant correlation between voting ACT in 2014 and being a manager (0.06). Managers tend overwhelmingly to vote National and are usually Kiwi-born.

All of the correlations with working-class occupations were significantly negative: technicians and trades workers (-0.39), community and personal service workers (-0.47), machinery operators and drivers (-0.52) and labourers (-0.61).

In terms of industry choice, ACT voters seem to gravitate to the sort of job where one is paid on commission. The strongest correlation between voting ACT in 2014 and the industry of the voter was with wholesale trade (0.66). Other strong correlations were with financial and insurance services (0.59) and professional, scientific and technical services (0.50).

Notably, there is a significant negative correlation with voting for ACT in 2014 and working in the healthcare industry (-0.29). So can guess that the wealthy foreigners voting ACT are not often doctors, psychiatrists or psychologists – this sort of person tends to vote Green.

Some might note with curiosity that the correlation between voting ACT in 2014 and being born overseas is a very strong 0.78. This is much higher than for any other party; in fact, it would almost be fair to say that ACT is a foreigner’s party.

By contrast, the correlation between being of Asian descent and voting ACT is a very strong 0.85. Given that there are many more Asians in New Zealand than ACT voters, this correlation suggests that the majority of ACT voters are foreign-born Asians.

Perhaps unsurprisingly, then, the party with which voting for ACT has the strongest negative correlation is with New Zealand First: this is -0.55. It’s probably fair to say that very few ACT voters are particularly patriotic about New Zealand.

The only party to have a significant positive correlation with voting ACT in 2014 was National, for which it was 0.35. None of the correlations with the other three were signficant: Labour -0.19, Greens -0.06 and Conservative 0.13.

ACT voters are often religious, but not Christian. Voting ACT in 2014 and being Christian is almost perfectly uncorrelated (-0.01). Given what we know about the tendency of ACT voters to be foreign-born we can predict that the religions with the strongest correlations with voting for the ACT Party are those with the weakest foothold here.

And so, the correlations between voting for the ACT party and belonging to a religion are significantly positive if that religion is Buddhism (0.85), Hinduism or Islam (both 0.50) or Judaism (0.42).

The only other income bracket with a significant positive correlation with voting ACT is that of ‘Loss or No Income’ – here the correlation is 0.32. This can easily be explained by the number of entrepreneurs who are still losing money, and it might be a major reason why the correlation between median personal income and voting ACT is less than it is with the National Party.

A picture starts to emerge of the typical ACT voter as the sort of foreigner who found their home country too economically restrictive for their own ambitions, so they came to New Zealand to work long hours, usually on commission, and hopefully not have to contribute to a social safety net that neither them nor anyone they care about should ever have to rely on.

What makes the ACT Party different to a true libertarian party is their emphasis on economic freedom at the expense of social freedom. Their website is full of rhetoric calling for greater punishments for burglaries but does not mention cannabis law reform. This might lose them half of their votes, but if the intent was to be a National Party support partner it could make co-operation easier.